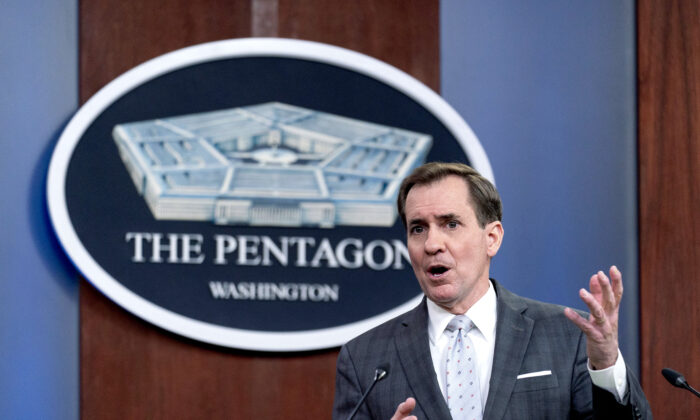 Pentagon spokesman John Kirby speaks during a briefing at the Pentagon in Washington, on Feb. 2, 2022. (Andrew Harnik/AP Photo)
Russia-Ukraine War

“We certainly see clear evidence that Russian forces are committing war crimes, and we are helping with the collecting of evidence of that, but there’s investigative processes that are going to go on, and we’re going to let that happen,” Kirby told reporters on Monday.

Kirby did not elaborate on the nature of the alleged war crimes. He also did not provide evidence.

Russian officials have not issued a public response to Kirby’s assertions. However, on Monday, Russia’s Foreign Ministry said that U.S.–Russia ties are on the “verge of breaking” due to White House officials’ claims about war crimes being committed.

His remark comes as an increasing number of White House officials have increasingly claimed that war crimes are being committed during the Ukraine-Russia conflict.

Last week, Defense Secretary Lloyd Austin said that Russian incursions “most recently appear to be focused directly on civilians,” adding, “Certainly, we’ve all been shocked by the brutality we continue to witness day in and day out.”

The United Nations said that more than 900 people have died so far in the conflict, while about 1,400 more have been hurt. However, the U.N. also noted that the figures are likely much higher.

In a statement released Monday, Russia’s Ministry of Foreign Affairs said it summoned U.S. Ambassador John Sullivan to rebuke him over recent comments made by President Joe Biden criticizing Russian President Vladimir Putin. It said that “such statements from the American president, unworthy of a statesman of such high rank, put Russian–American relations on the verge of breaking,” according to a translation.

Around the same time, European Union countries also accused the Russian armed forces of committing war crimes in Ukraine. But it appeared unlikely that they would impose new sanctions on Moscow, namely as a number of EU nations still rely on Russian gas and oil.

Many Western-based international corporations have said they won’t do business with or won’t make any new investments in Russia due to the conflict.

Ukrainian officials on Monday accused Russia of shelling a shopping mall in Kyiv, but Russian officials published video footage that purported to show Ukrainian artillery hiding inside what appears to be a garage in the mall. Ukraine’s prosecutor general accused Moscow of targeting civilians and said at least eight people had been killed.

That was disputed by a Ukrainian army chaplain, Mykola Medinskiy, who told Reuters that there were no strategic military assets in the area when Russia fired upon the shopping mall.

The Kyiv government has also accused Russia of bombing a theater that was hiding refugees in Mariupol last week. Moscow has denied targeting the building.