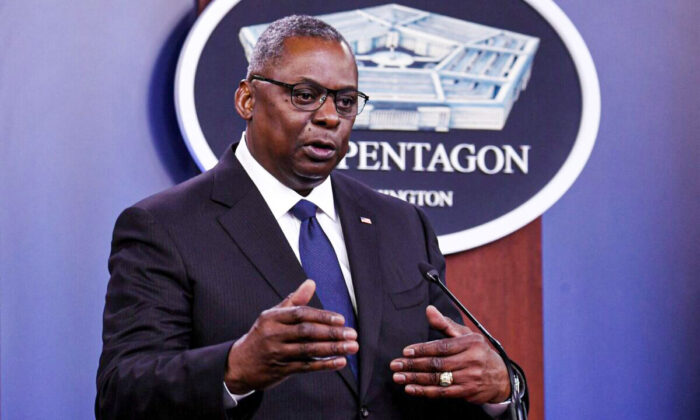 U.S. Secretary of Defense Lloyd Austin warned on Dec. 4 that the Chinese regime’s repeated military air activities near Taiwan appear to be a “rehearsal” for future military operations against the self-ruled island.

Austin issued the warning while speaking at the Reagan National Defense Forum in California. He made the comment about Taiwan while addressing the overall challenges posed by the “emergence of an increasingly assertive and autocratic China.”

“It looks like a lot like them exploring their true capabilities and sure it looks a lot like rehearsal,” Austin said when asked about the Chinese military’s air operations near Taiwan.

The Chinese Communist Party (CCP) doesn’t recognize Taiwan’s sovereignty and has threatened war to bring the island under its reign. In October, Chinese leader Xi Jinping vowed to achieve “reunification” with Taiwan and called the island’s independence a “serious hidden danger to national rejuvenation.”

For more than a year, the Chinese regime has been flying military jets into Taiwan’s southwest air defense identification zone (ADIZ) in an effort to intimidate the island into submission. According to flying records by Taiwan’s defense ministry, the Chinese regime flew about 380 sorties last year.

That number has more than doubled this year. On Dec. 3, Taiwan’s Premier Su Tseng-chang told the island’s unicameral legislature that there had been more than 880 sorties in 2021.

There’s no sign that Beijing is easing its aggression against Taiwan. Recently, such incursions have occurred for 36 consecutive days dating back to October. On Dec. 4, two Chinese J-16 fighter jets entered the island’s ADIZ, prompting Taiwan’s military to scramble jets and deploy missile systems in response.

Austin said, “We remain steadfast to our one-China policy and our commitments under the Taiwan Relations Act to support Taiwan’s ability to defend itself, while also maintaining our capacity to resist any resort to force that would jeopardize the security of the people of Taiwan.”

Washington and Taipei currently aren’t diplomatic allies, but the two sides enjoy a robust relationship under the Taiwan Relations Act, under which the United States has agreed to supply Taiwan with military equipment for its self-defense.

Austin added: “We’re doing a lot to support Taiwan right now. We’re going to look for ways to do more.”

Just two days before the Pentagon chief made his comment, Secretary of State Antony Blinken said that the United States is “resolutely committed to Taiwan” in the event of a Chinese invasion. He also warned China not to “precipitate a crisis” that would have “terrible consequences.”

China’s hawkish media Global Times, in an editorial published on Dec. 4, called Blinken’s words “deranged.” The article claimed that any attempt to stop China’s “reunification” with Taiwan “will never succeed.”

​​In October, Taiwan’s defense minister warned that the Chinese regime would be capable of mounting a full-scale invasion of the self-ruled island by 2025.

China’s aggression isn’t limited to Taiwan. In fact, the communist regime is seeking to displace U.S. leadership around the world, Austin said.

“The leaders of the Chinese Communist Party have been increasingly vocal about their dissatisfaction with the prevailing order—and about their aim of displacing America from its global leadership role,” Austin said.

China’s military poses one of the foremost challenges that the United States must face, according to Austin.

“China’s military is on pace to become a peer competitor to the United States in Asia, and, eventually, around the world,” he said. “China’s nuclear posture is changing as well. The PLA [People’s Liberation Army] has been rapidly advancing its nuclear capabilities.”

In its report published in November, the Pentagon stated that China is on track to have 700 deliverable nuclear missiles by 2027; the number was estimated to top 1,000 by 2030.

“China’s leaders are expanding their ability to project force and to establish a global network of military bases,” Austin said.

The Chinese military currently has a naval military base in Djibouti, located in the Horn of Africa. The country also hosts a permanent U.S. military base known as Camp Lemonnier.

According to the Pentagon report, the Chinese regime has likely considered a number of countries for PLA bases or military logistic facilities, including Burma, Cambodia, Thailand, Singapore, Sri Lanka, United Arab Emirates, Kenya, Angola, and Tajikistan.

“We’re strengthening our peerless network of allies and partners with a shared commitment to a peaceful and prosperous Indo–Pacific, a region where all countries are free from coercion, and where the rules that buttress stability and expand liberty are upheld,” Austin said.

The Pentagon chief also assured U.S. partners and allies in the Indo–Pacific that the United States was committed to the region.

“In every conversation with our partners, I hear the same thing again and again: a call for the United States to continue playing our stabilizing role in the Indo–Pacific,” Austin said. “And make no mistake: we will.”

Since becoming secretary of defense in January, Austin has made three trips to the Indo–Pacific, visiting Japan, South Korea, India, Singapore, Vietnam, and the Philippines.

Austin said the United States is going to confront the China challenge with “confidence and resolve,” not “panic and pessimism.”

“America is a Pacific power. And we will always be.”