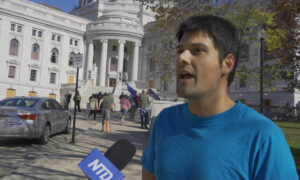 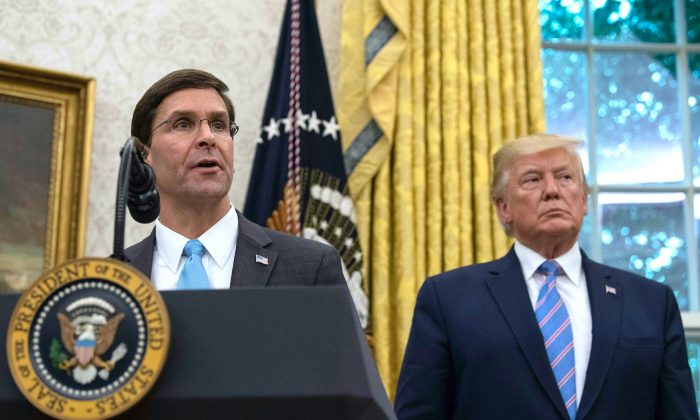 Defense Secretary Mark Esper speaks after he was sworn in as President Donald Trump looks on in the Oval Office at the White House in Washington, DC, on July 23, 2019. (Nicholas Kamm/AFP/Getty Images)
Trump Administration

I am pleased to announce that Christopher C. Miller, the highly respected Director of the National Counterterrorism Center (unanimously confirmed by the Senate), will be Acting Secretary of Defense, effective immediately.

Miller was performing the “Duties of the Assistant Secretary of Defense (ASD) for SO/LIC and is former Deputy Assistant Secretary of Defense (DASD) for Special Operations and Combating Terrorism (SOCT),” according to the Defense Department’s website. “From March 2018 through December 2019, Mr. Miller served as the Special Assistant to the President and Senior Director for Counterterrorism and Transnational Threats at the National Security Council (NSC).

“In this position, Mr. Miller was responsible for strategic-level policy making and implementation, and support to senior NSC and White House leadership.”

Last week, Pentagon spokesman Jonathan Hoffman told news outlets that amid rumors and unconfirmed reports of Esper’s ouster or resignation, Esper had no plans to resign.

“He continues to serve the nation as the secretary of Defense at the pleasure of the president and is working on the irreversible implementation of the National Defense Strategy,” Hoffman said at the time. “The speculation about potential resignations of Cabinet officials is a tiresome, well-worn, DC-insider, post-election parlor game.”

Esper replaced James Mattis, who resigned after disagreeing with the Trump administration’s move to withdraw troops from Syria. Esper, 56, had been serving as Army secretary when Trump picked him in July 2019.