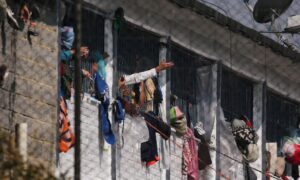 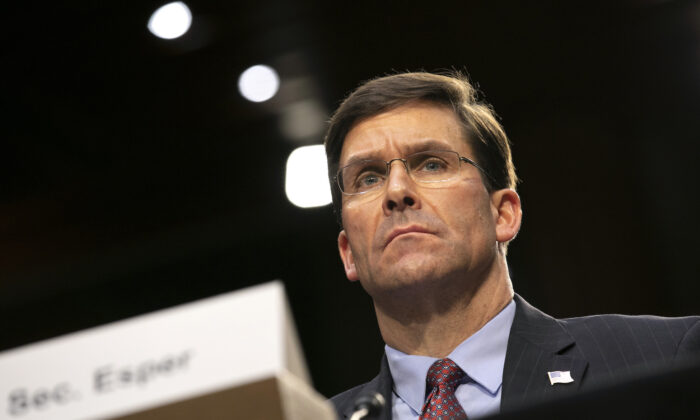 Secretary of Defense Mark Esper testifies to the Senate Armed Services Committee about the budget, on Capitol Hill in Washington on March 4, 2020. (Jacquelyn Martin/AP Photo)
US News

Secretary of Defense Mark Esper said the federal government should not invoke the Insurrection Act of 1807 that allows the president to deploy U.S. military and federalized National Guard troops within the United States in some instances. There was speculation President Donald Trump may use the law to quell civil unrest across the country.

“I’ve always believed and continue to believe that the National Guard is best suited for performing domestic support to civil authorities in these situations in support of local law enforcement,” Esper told reporters at a news conference Wednesday.

He added that he is saying that “also as a former soldier and a former member of the National Guard, the option to use active-duty forces in a law enforcement role should only be used as a matter of last resort and only in the most urgent and dire of situations.”

Amid the sometimes violent protests, looting, vandalism, and arson over the death of George Floyd last week, Esper noted that the U.S. is “not in one of those situations now” where the Insurrection Act needs to be used.

On Monday, President Trump suggested that he could invoke the federal law to respond to the unrest if governors fail to act.

The Insurrection Act has been used only sparingly but was invoked throughout the 19th century, namely during conflicts with Native Americans. It was also used to enforce federally mandated desegregation efforts in the 20th century, with Presidents Dwight Eisenhower and John F. Kennedy invoking the law in opposition to state leaders.

The act was also invoked during the 1992 Los Angeles riots by the late President George H.W. Bush. It was first used by third President Thomas Jefferson to deal with Embargo Act violations in 1808.

In explaining why he might invoke the law, Trump said on Monday: “If a city or state refuses to take the actions that are necessary to defend the life and property of their residents, then I will deploy the United States military and quickly solve the problem for them.”

It came after Sen. Tom Cotton (R-Ark.) said Monday that the president should use it to deploy active-duty troops to cities impacted by riots and violence.

“What the president can do is say that justice will be done in accordance with law for George Floyd and we will always respect the right of peaceful protests … but the rioting, the anarchy and the looting ends tonight. If local law enforcement is overwhelmed … lets see how these anarchists respond when the 101st Airborne is on the other side of the street,” Cotton told Fox News.