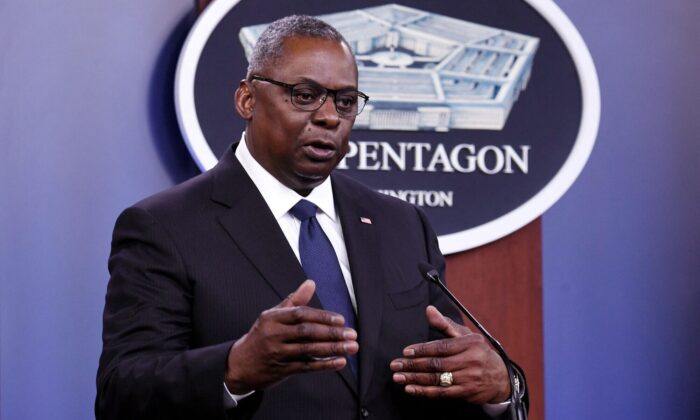 Defense Secretary Lloyd Austin speaks to the press, at the Pentagon in Washington, on Aug. 18, 2021. (Olivier Douliery/AFP via Getty Images)
Afghanistan

Pentagon Chief: Al-Qaeda Expected to Try and ‘Regenerate’ in Afghanistan

Defense Secretary Lloyd Austin said Thursday that al-Qaeda terrorists may attempt to reconstruct itself in Afghanistan following the Taliban takeover of the country and now that the United States has withdrawn its troops.

“I think the whole community is kind of watching to see what happens and whether or not al Qaeda has the ability to regenerate in Afghanistan,” Austin said in Kuwait City, Kuwait, reported The Associated Press.

Between 1996 and 2001, the Taliban allowed al-Qaeda to operate within Afghanistan before the United States invaded and overthrew the Taliban in the aftermath of the Sept. 11, 2001, terrorist attacks. Over the past two decades, al-Qaeda has been vastly diminished, as its former leader Osama bin Laden was killed in 2011, but with the Taliban takeover, questions remain about whether the group could return to prominence.

The United States, Austin said, issued a warning to the Taliban—designated as a terrorist organization by several federal agencies—not to harbor al-Qaeda or any other terror group. The group was put “on notice that we expect them not to allow that to happen,” he remarked.

In the interim, however, it appears that the ISIS-K terror group may pose more of a threat in the near future. Last month, amid a rushed and chaotic evacuation of Americans and Afghans at the Kabul airport, 13 U.S. service members were killed in a suicide bombing attack that was later claimed by ISIS-K. Days later, Pentagon officials acknowledged that the number of ISIS-K members who were released from Afghan prison may be “in the thousands.”

Austin and Secretary of State Antony Blinken both appeared in Qatar this week in a show of Washington’s gratitude that the Gulf state allowed for the transit of thousands of Afghans and other foreign nationals who were evacuated over the past month.

Earlier this month, meanwhile, President Joe Biden directed the release of classified documents related to the Sept. 11 attacks in a gesture to the victims’ families, who have sought the records. It came after a group representing the families sent a letter to Biden, telling him not to come to their memorials on Sept. 11 unless he releases the information.

White House spokeswoman Jen Psaki told reporters that as of Wednesday, approximately 100 U.S. citizens were still in Afghanistan, adding that some may have family in the country or other reasons for not departing. However, some members of Congress have claimed that far more American citizens remain—possibly more than 500—including their family members.