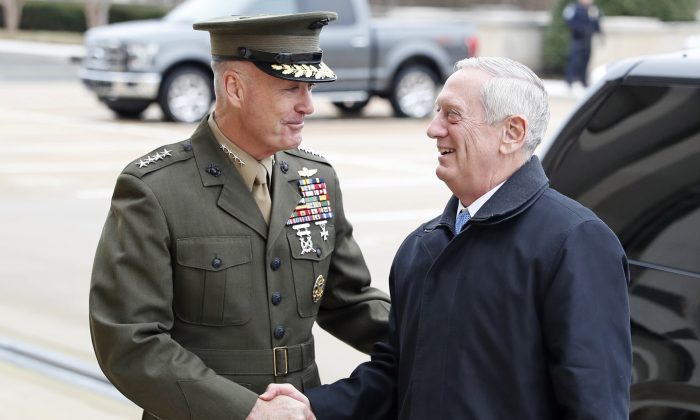 Americans are seeking reassurance, too. Concern has surged on both sides of the Pacific about the North’s weapons programs, after leader Kim Jong Un warned in his annual New Year’s address that the country is in the final stages of readiness to test-launch an intercontinental ballistic missile that could potentially threaten the continental United States.

In Washington this week, the Senate Foreign Relations Committee held its first policy hearing since Trump took office to discuss North Korea. There were more questions than answers.

North Korea just stated that it is in the final stages of developing a nuclear weapon capable of reaching parts of the U.S. It won’t happen!

“Does that mean we have drawn a red line?” Sen. Ben Cardin, D-Md., asked at Tuesday’s Senate hearing.

Those questions and more will be posed to Mattis when he meets top officials in Seoul on Thursday and Tokyo later in the week, two allies that host nearly 80,000 U.S. troops.

During the campaign, Trump complained that defense treaties disadvantaged the U.S. and that he would not rule out abandoning signatories if they refuse to pay more for their defense. He also suggested that South Korea and Japan, which are already within the range of North Korean missiles, might acquire their own nuclear weapons rather than rely on U.S. deterrence.

“It was a smart decision” to visit these allies early, former Defense Secretary Chuck Hagel said in an interview. He believes officials in Tokyo and Seoul are wondering: “Can we rely on the U.S.? What is the future here?”

In phone conversations last weekend with the leaders of South Korea and Japan, Trump offered his own reassurance, saying the U.S. defense commitment to both nations was “ironclad.”

In Congress, bipartisan legislation passed last year empowered the U.S. government to apply Iran-style economic restrictions on the communist state, which includes punishing other countries that deal with Pyongyang in violation of U.N.-approved sanctions.

The obvious target is China, the North’s top economic partner. But going after Beijing entails its own dangers. The Chinese regime can retaliate against the United States, raising the prospect of a trade war, or could end up less motivated to cooperate with Washington on containing North Korea.

At this week’s hearing, Republican committee chairman Sen. Bob Corker questioned whether anything short of military action or regime change would force Kim to give up nuclear weapons. The sanctions legislation, he said, is “piddling compared to the challenge,” and he called for new ideas about a U.S. strategy.

Trump has consistently emphasized the need for China to exert more pressure on its unpredictable neighbor. But Trump has also said he would be open to sitting down for a hamburger with Kim, who has met no other foreign leader since assuming power five years ago.

No one seems comfortable with the previous administration’s “strategic patience,” though ready alternatives appear few. The inherited approach involved America tightening sanctions while refusing to jump into aid-for-disarmament negotiations. In the meantime, Pyongyang has marched toward greater prowess. Last year alone, the North staged two underground atomic explosions and two dozen ballistic missile tests, including its first from a submarine.

Estimates of North Korea’s capabilities vary, but some U.S. experts believe it could be able to strike the U.S. mainland with a nuclear weapon by the end of the decade. By then, the North could also have enough reprocessed plutonium and enriched uranium for 100 bombs—not far short of India and Pakistan’s likely arsenals.

Cardin, the Foreign Relations Committee’s top Democrat, said he understood the U.S. may need to consider military options against North Korea. But he warned against setting such a policy rashly, drawing a comparison with Trump’s executive order on immigration and refugees that has drawn international condemnation.