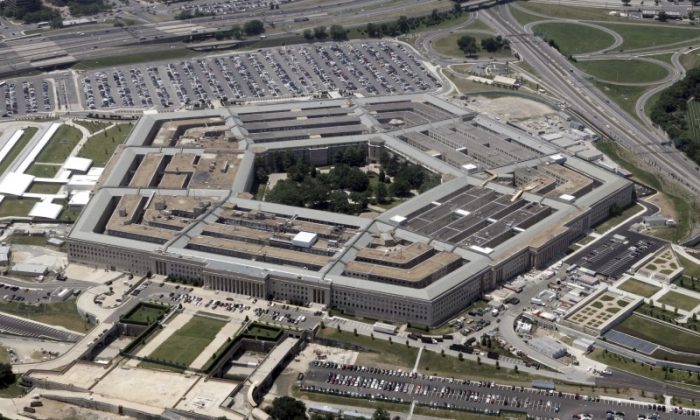 An aerial view of the Pentagon building in Washington, on June 15, 2005. (Jason Reed/Reuters)
US News

It doesn’t mean that the Pentagon admitted the existence of extraterrestrials, but a spokesperson told the New York Post that a secret government program called the Advanced Aerospace Threat Identification Program “did pursue research and investigation into unidentified aerial phenomena.”

The Defense Department said it shut down the program in 2012. However, Pentagon spokesman Christopher Sherwood said that the agency still investigates claims of spacecraft sightings.

“The Department of Defense is always concerned about maintaining positive identification of all aircraft in our operating environment, as well as identifying any foreign capability that may be a threat to the homeland,” Sherwood said in the Post’s report, published on May 22.

He added: “The department will continue to investigate, through normal procedures, reports of unidentified aircraft encountered by US military aviators in order to ensure defense of the homeland and protection against strategic surprise by our nation’s adversaries.”

The Post also interviewed Nick Pope, who investigated UFOs for the British government, said the comments are a “bombshell revelation.”

“Previous official statements were ambiguous and left the door open to the possibility that AATIP was simply concerned with next-generation aviation threats from aircraft, missiles and drones—as skeptics claimed,” he told the paper. “This new admission makes it clear that they really did study what the public would call ‘UFOs,’” he said.

“I’m shocked they said it that way, and the reason is, is they’ve seemingly worked very hard not to say that,” the Post quoted him as saying. “So I think that’s a pretty powerful statement because now we have actual evidence—official evidence—that said, ‘Yes, AATIP did deal with UAP cases, phenomena, videos, photos, whatever.’”

In December 2017, the Pentagon admitted that it funded a program to collect information on unexplained aerial phenomenon, referring to the Advanced Aerospace Threat Identification Program, reported The New York Times at the time.

Sara Seager, an astrophysicist at M.I.T., said that the unidentified object doesn’t mean it’s from a different planet or galaxy.

“When people claim to observe truly unusual phenomena, sometimes it’s worth investigating seriously,” she told the Times, adding that “what people sometimes don’t get about science is that we often have phenomena that remain unexplained.”

The Pentagon has acknowledged a secret program to investigate UFOs. It began in 2007 as a pet project of Harry Reid. https://t.co/eRvbBamKgz pic.twitter.com/rhPyQDgtd7

Robert Bigelow, who runs Bigelow Aerospace and works with NASA, told CBS News following the admission in 2017: “There has been and is an existing presence, an ET presence. And I spent millions and millions and millions—I probably spent more as an individual than anybody else in the United States has ever spent on this subject.”

In 1947, the U.S. Air Force began investigating claims of UFOs, the NY Times reported, adding that it was dubbed “Project Blue Book.” It ended in 1969 with about 700 sightings unexplained.