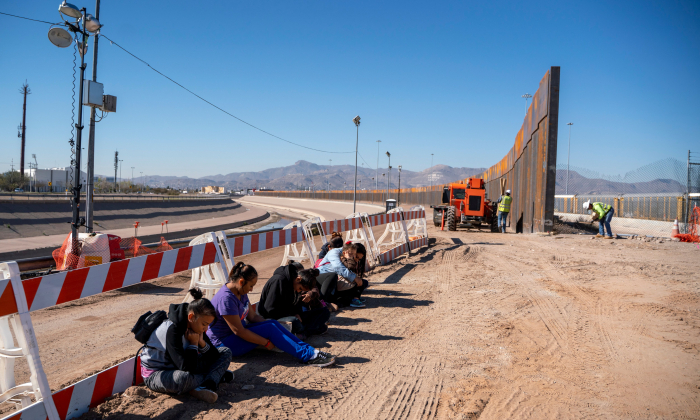 Salvadoran illegal aliens wait for a transport to arrive after turning themselves into U.S. Border Patrol by border fence under construction in El Paso, Texas, on March 19, 2019. (Paul Retje/AFP/Getty Images)
Trump Administration

The Department of Defense notified Congress on March 25 that it has authorized the transfer of $1 billion toward the construction of a wall on the U.S.–Mexico border.

The Pentagon sent a budget reprogramming notice to Congress detailing the reallocation of $1 billion toward the construction of 57 miles of the border, road improvements, and other measures.

The Pentagon authorized the Army Corps of Engineers to begin construction March 25. According to the press release, the corps will build 18-foot high fencing in the Yuma and El Paso sections of the border.

El Paso has seen a 500 percent surge in illegal alien apprehensions this fiscal year. Underscoring the scale of the surge, border patrol agents in El Paso caught more than 400 illegal aliens in the span of five minutes on March 19.

Last month, President Donald Trump declared a national emergency on the southwest border, which enabled him to redirect Department of Defense funds toward border wall construction. In addition to the emergency funds, Trump ordered the transfer of funds from the Treasury Department’s forfeiture fund and the Pentagon’s counterdrug activity purse.

The $1 billion authorized on March 25 is coming from the counterdrug activity pot, which Trump ordered to be augmented to a total of $2.5 billion. The funds will ultimately flow from the Department of Homeland Security to the Army Corps of Engineers.

“We strongly object to both the substance of the funding transfer, and to the Department implementing the transfer without seeking the approval of the congressional defense committees and in violation of provisions in the defense appropriation itself,” the letter states. “As a result, we have serious concerns that the Department has allowed political interference and pet projects to come ahead of many near-term, critical readiness issues facing our military.”

The White House so far has secured $8.1 billion toward border wall construction. Of the total, $1.4 billion was approved by Congress, $3.1 billion was reallocated from other departments, and $3.6 billion was made available under the emergency declaration.

The Immigration and Customs Enforcement agency has released more than 100,000 illegal alien family members so far this year. Many are arriving in large groups at the border, a new trend. The number of illegal aliens could reach 1 million this year.