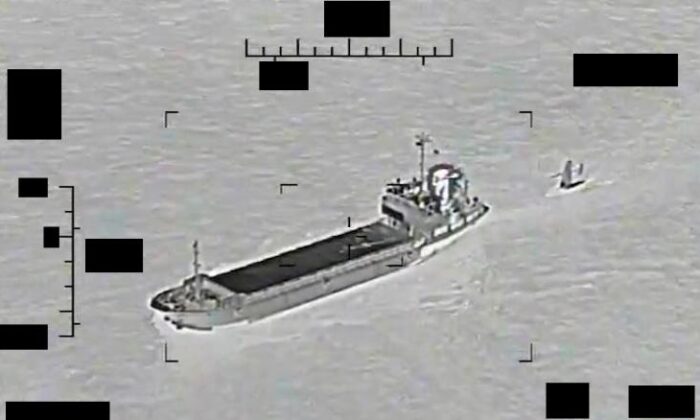 The U.S. Navy has foiled an attempt by Iran to capture an unmanned U.S. drone ship in the Persian Gulf, U.S. military officials confirmed on Aug. 30.

Actions taken by U.S. Naval forces resulted in the Iranian vessel disconnecting the towing line to the USV, according to the statement.

While the incident ended peacefully, tensions remain high between Washington and Tehran, as negotiations over Iran’s tattered nuclear deal with world powers hang in the balance.

The Iranian Guard’s Shahid Baziar warship attached a line to the Saildrone Explorer in the center of the Persian Gulf in international waters, said Cmdr. Timothy Hawkins, a 5th Fleet spokesman. The vessel then began towing the unmanned ship, which carries cameras, radars, and sensors for navigation and data collection, Hawkins said.

“Our response was one that as such made clear that this was U.S. government property and was operating in international waters and that we had every intention to take action if necessary,” he told The Associated Press.

Iranian state-run Tasnim News alleged that “many unmanned American vessels have been deployed to international waters” in recent weeks, saying they pose a danger to “international shipping lanes from Bahrain.” The website didn’t provide evidence for the claim.

Tasnim, citing Iran’s Islamic Revolutionary Guard Corps, said that the U.S. Navy “released a Hollywood-style account” of the incident and “distorted the reality … in an attempt to cover up part of its failures.”

The 5th Fleet launched its unmanned Task Force 59 last year. The 5th Fleet’s area of responsibility includes the crucial Strait of Hormuz, the narrow mouth of the Persian Gulf, through which 20 percent of all oil passes.

It also stretches to where the Red Sea meets the Suez Canal, the waterway in Egypt that links the Mideast to the Mediterranean, and the Bab el-Mandeb Strait off Yemen.