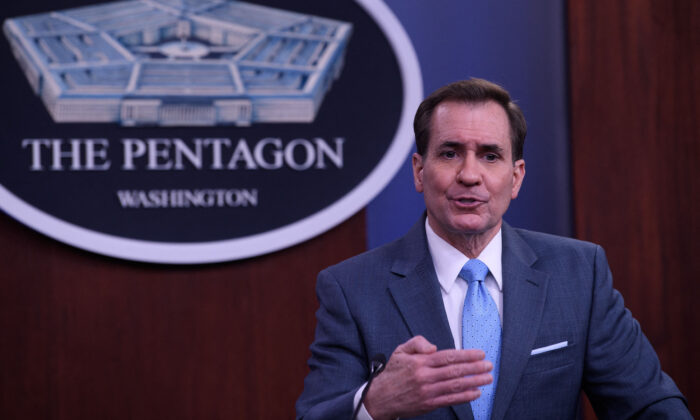 Pentagon spokesman John Kirby speaks during a briefing at the Pentagon in Washington, on Feb 1, 2022. (Nicholas Kamm / AFP via Getty Images)
Executive Branch

The United States is deploying about 3,000 troops to Eastern European ally countries, amid ongoing tensions between Russia and Ukraine, the Pentagon announced on Feb. 2.

Kirby said that these are “not permanent moves” and the forces are “not going to fight in Ukraine, but are going to ensure the robust defense of our NATO allies.” He added that the troops are trained for a “variety of missions,” including to “deter aggression.”

“The current situation demands that we reinforce the deterrent and defensive posture on NATO’s eastern flank,” Kirby said. “President Biden has been clear that the United States will respond to the growing threat to Europe’s security and stability.”

White House press secretary Jen Psaki said on Feb. 1 that the UK, France, Spain, Denmark, and the Netherlands have all committed to sending additional forces to eastern NATO countries.

Russia fired back with a sharply worded objection, calling the deployments unfounded and “destructive.”

Russia has amassed tens of thousands of troops along its border with Ukraine in recent weeks, as well as in Russia-annexed Crimea and Belarus. The Russian troop count, along with heavy artillery and anti-aircraft weaponry, in these locations has increased as recently as this past weekend, Kirby said on Jan. 31.

In a series of ongoing talks between Russia and the United States, U.S. officials have threatened to coordinate with allies to impose “severe” sanctions against Russia if it invades Ukraine. For weeks, the Biden administration has said “other measures” could include additional defensive material to the Ukrainians and the fortification of NATO allies on Russia’s eastern flank with additional capabilities.

President Joe Biden has said that sending U.S. troops to Ukraine is “off the table.”

The Pentagon announced last week that it placed 8,500 American troops at a “heightened readiness to deploy” in support of eastern NATO allies should the ongoing tensions between Russia and Ukraine warrant.

U.S. officials have said sanctions will be more severe than those imposed against Russia when it invaded the Crimean Peninsula in 2014.

Psaki said on Jan. 31 that sanctions would extend to individuals in Moscow’s inner circle as well as major parts of the financial system in the event of a Russian invasion of Ukraine.

Over the weekend, at least two U.S. senators said the Senate is close to reaching a deal on legislation that would preemptively sanction Russia over its actions on Ukraine, whether Moscow moves to invade or not.

Russia, meanwhile, has made demands that include NATO not allowing Ukraine to join the alliance as a member.

The United States responded in writing to these demands last week. Secretary of State Antony Blinken said the response “sets out a serious diplomatic path forward should Russia choose it.”

Moscow then sent its own written response to the United States ahead of a planned phone call between Blinken and Russian Foreign Minister Sergey Lavrov on Feb. 1.

At a news conference in Kyiv on Jan. 28, Ukrainian President Volodymyr Zelensky acknowledged the Russian escalation, but also called on mass media and Western leaders to tone down the rhetoric that suggests a Russian invasion is imminent.

“The image that mass media creates is that we have troops on the roads, we have mobilization, people are leaving places. That’s not the case,” Zelensky said. “We don’t need this panic.”

At the Feb. 1 White House press briefing, Psaki walked back a previous statement describing a Russian invasion of Ukraine as “imminent.”

“I used that once. I think others have used that once and then we stopped using it, because I think it sends a message that we weren’t intending to send, which was that we knew that [Russian] President [Vladimir] Putin had made a decision,” she said. “I’d say the vast majority of times I’ve talked about it and said that ‘he could invade at any time’—that’s true.”