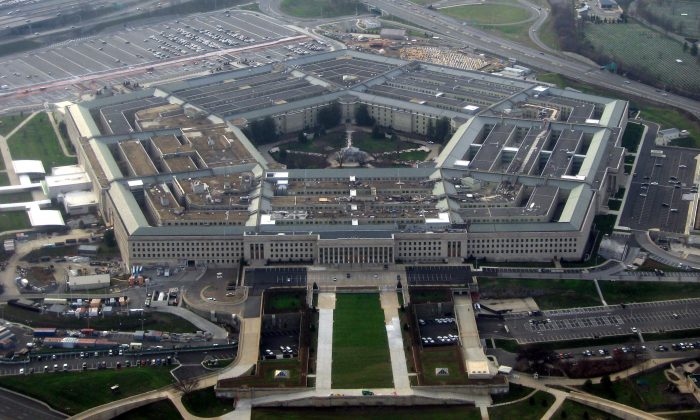 The Pentagon, headquarters of the United States Department of Defense, taken from an airplane in January 2008. (David B. Gleason/Wikimedia Commons)
US News

The Advanced Aerospace Threat Identification program continues today, but without government money, according to military intelligence official Luis Elizondo, via The New York Times. The program received government funding starting in 2007 until it was defunded in 2012.

Program workers collected materials recovered from UFOs, examined people who experienced physiological symptoms after encountering UFOs, and spoke to members of the military who filed reports on seeing strange objects.

The New York Times published footage of Navy pilots encountering UFOs, recovered as part of the Advanced Aerospace Threat Identification program. The article described how they encountered a highly advanced aircraft that could travel extremely fast and hover over water, as well as move in ways they never saw an aircraft move. It was reports like these not getting enough attention that caused Elizondo, who led the program from within the Pentagon, to resign. He was frustrated with the program getting low priority by the Department of Defense, according to the Times.

In his resignation letter, Elizondo said more attention should be given to “the many accounts from the Navy and other services of unusual aerial systems interfering with military weapon platforms and displaying beyond-next-generation capabilities.” He also asked, “Why aren’t we spending more time and effort on this issue?” in the letter, via the Times. He has since named a successor and said that the program continues.

Robert Bigelow provides the expertise to operate the program, along with the facilities. He runs Bigelow Aerospace and works with NASA. Bigelow found financial success with a chain of cheap, long-stay hotels, CBS reported. He funneled that money into his aerospace and UFO passion. Bigelow mentioned his grandparents had a UFO encounter while he was growing up in Nevada. That gave him the motivation to explore the topic further.

This isn’t the first time such a program existed. In 1947 the Air Force started to investigate claims of over 12,000 UFO sightings, the Times reported. The program, which included the code-named “Project Blue Book,” ended in 1969 with 701 phenomena still unexplained.