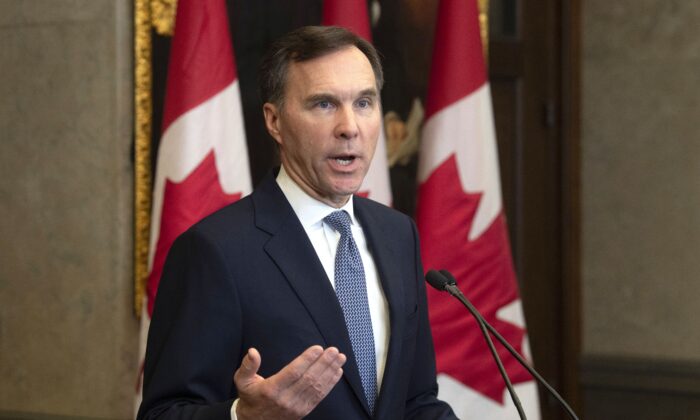 Finance Minister Bill Morneau provides a fiscal update in the foyer of West Block in Ottawa on Dec. 16, 2019. Parliamentary Budget Officer Yves Giroux was alarmed after the update projected a deficit $7 billion higher than the budget announced in March. (The Canadian Press/Adrian Wyld)

How scary are Canada’s federal deficits really? Parliamentary Budget Officer Yves Giroux was alarmed after the recent fiscal update projected a deficit $7 billion higher than the budget announced in March. As it turned out, much of the blame was due to accounting changes on pensions and benefits for federal employees.

Strangely, many observers, including Giroux, want changes to the accounting practice. In reality, the more urgent and necessary policy is to scale back those pension obligations themselves.

Federal employees have the best of all worlds: job security, great pay, and gold-plated pensions. In 2012, the average full-time federal civil servant made $81,353 in salary, and $114,100 if benefits and pensions were included. Defined benefit pension plans pay out 2 percent times the average of the best five years of pay times the years served. This means employees who worked 35 years and made $100,000 at the end of their career will earn $70,000 annually in their government pension.

These pensions are rich enough to ensure that most federal government retirees will make more in their final years doing nothing than most Canadians will during their working years. But that’s not all. The civil servants’ retirement will be augmented by Old Age Security. OAS is not clawed back whatsoever unless someone makes more than $77,580 in their golden years. And if these government employees made other investments during their working years, that’s all gravy too.

The private sector found out long ago that such pension plans are too pricey and risky to maintain. In 2010, General Motors and Chrysler almost sank under the weight of such obligations until the government bailed them out. These days, taxpayers shore up the defined benefit pensions of the federal government’s own workers, plus many provincial and municipal ones.

These pensions are unaffordable now and will only get worse in the future. The retirement of the boomer generation has been called a “grey tsunami” for public finances. Governments will fork out higher payments to those aged 65 and over in pensions and benefit programs just as the percentage of people in the workforce will drop. Even worse, the per-capita cost of health care is 4.4 times higher for a senior than for those aged 15 to 64. The bills will soar.

The trajectory is dismal, if not scary. The Fraser Institute estimated in 2017 that these trends would stretch the shortfall between government expenditures and revenues from 2 percent of GDP up to 7.1 percent by 2045. That means a federal deficit of $143 billion in current dollars. By then Canada’s accumulated federal debt would be about 200 percent of GDP.

That snowball is already growing, as Giroux mentioned in his recent report. The Trudeau Liberals, having abandoned their 2015 promise to balance budgets, had at least committed to lowering the debt-to-GDP ratio. Unfortunately, the fiscal update showed that ratio has already worsened from 30.8 percent last fiscal year to 31.0 percent in this one.

Can anything be done? Absolutely. But political expediency often overshadows long-term considerations. The Harper Conservatives tried to increase the age of eligibility for OAS and cut off the amount of sick days that federal civil servants could accumulate. The Liberals reversed both of those moves.

This government can change course, as can any other. It’s been done before and it can be done again. All it takes is courage.

On the public pension front, Saskatchewan provides an inspiring example. In 1977, the New Democratic Party government led by Allan Blakeney changed the pensions for provincial civil servants and crown employees. New hires would get a defined contribution plan, instead of a defined benefit. Existing employees could stay on the old defined benefit plan or switch to the new.

Under Saskatchewan’s defined contribution plan, employees can contribute up to nine percent of their salary to the pension plan and the government matches it. Fund managers do their best to get a good rate of return, but there are no guarantees. If the stock market loses half of its value, such as the meltdown of 2008, so do the employee pensions. Taxpayers who just lost half the retirement savings in their RRSPs were not handed the additional burden of propping up provincial government employees guaranteed a pension no matter what.

Even though this change was made over 40 years ago, the cash flows required to shore up the old plan are still growing. However, they will soon peak and then decline to zero. No wonder Saskatchewan is one of just two provinces likely to remain solvent in 2041.

The federal government should pass legislation to make defined benefit pensions illegal for public servants at all levels of government. OAS should also be clawed back at a much lower income threshold. The government should not subsidize retirees who make more than working Canadians.

The final option, and the one most likely to occur, is that the federal government maintains the status quo right over the fiscal cliff. After bankruptcy, federal retirees become creditors left with whatever scraps remain. One way or another, these pensions and benefits will diminish.

The sooner the needed adjustments are made, the better and more certain the future for everyone.