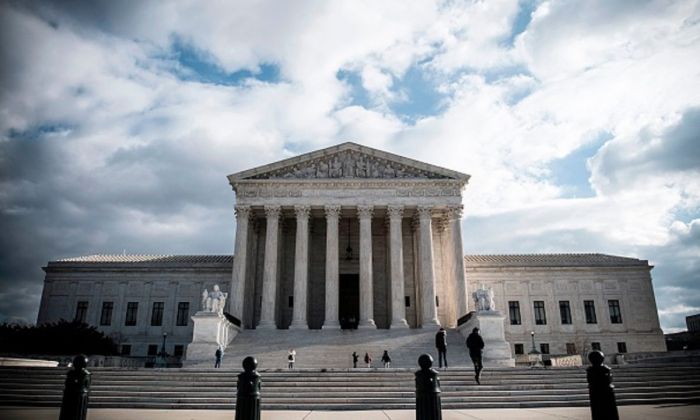 WASHINGTON—Defined benefit plan participants should be allowed to sue plan administrators for fiduciary breaches even when the retirement plan is overfunded and participants have not lost money, a lawyer for participants told the Supreme Court.

A company retirement plan is said to be “overfunded” when its assets exceed its liabilities, allowing the surplus funds to be used to cover current and future retirements.

Oral arguments in the case, cited as Thole v. U.S. Bank, were heard by the Supreme Court on Jan. 13. Some business advocates view the Thole case as an opportunity for the Supreme Court to curb perceived lawsuit abuses by the plaintiffs’ bar, while investors say they deserve to be treated fairly by plan administrators. The Trump administration weighed in on behalf of the investors.

Petitioners James J. Thole and Sherry Smith claim the bank violated its fiduciary duties when it plowed the assets of the U.S. Bancorp Pension Plan into high-risk equity investments, which led to huge theoretical losses that the bank should be forced to repay.

According to the petitioners, the 2008 market crash reduced the value of the plan’s assets by $1.1 billion, which they say was $748 million more of a dip than the plan would have suffered if its investments had been more diverse. This left the plan underfunded, capable of covering only 84 percent of its liabilities. U.S. Bank kicked in $339 million, returning the plan to a surplus position.

The trial court and the 8th Circuit Court of Appeals found for the bank, holding that the pension plan had bounced back and returned to financial soundness. Because the plan participants didn’t actually lose money, they lacked standing to sue.

The Trump administration didn’t buy into that line of reasoning. The government maintains that any breach of a fiduciary duty is reason enough to allow plan participants to ask the courts for an injunction.

The plan participants’ attorney, Peter K. Stris, said his clients have an “equitable interest” in the assets of a plan, and therefore it makes sense they should be allowed to sue when an ERISA violation in claimed.

“We allege that the trustees, through disloyalty and imprudence, caused the trust to lose $750 million,” Stris told the justices.

“My clients have a right to loyal stewardship of their retirement savings. When respondents engaged in self-dealing, my clients suffered a concrete injury.”

On behalf of the bank, attorney Joseph R. Palmore said the petitioners have no legal standing because the bank made them whole by injecting $339 million into the plan.

“Like all plaintiffs in federal court, those with ERISA claims must demonstrate injury. Neither petitioner here can do that.”

Palmore said that whether the Supreme Court rules in favor of or against the petitioners, “it is undisputed that those payments will be exactly the same every month for the rest of their lives, not one penny less.”

If the benefits were linked to the value of the plan, they would have standing, “but these are fixed payments.”

“Federal courts are not available to adjudicate claims like this that do not matter to the plaintiffs. Whether viewed as a matter of Article III [of the Constitution] or statutory standing, none of petitioners’ arguments solve that fundamental problem with their case,” he said.

Justice Elena Kagan said Palmore’s argument “falls apart” under ERISA. Congress gave “all of the beneficiaries and participants an equitable interest in the integrity of the trust” when it passed ERISA.

Justice Brett Kavanaugh told Sopan Joshi of the U.S. solicitor general’s office that it’s difficult to rule that the participants have standing because it is “99.9 percent certain” they will receive the benefits promised them, but trust law supports their right to litigate.

Thole v. U.S. Bank is the third case involving ERISA that the Supreme Court docketed for its current term, which began in October 2019.

As The Epoch Times previously reported, in Intel Corporation Investment Policy Committee v. Sulyma, the justices seemed unreceptive to arguments Dec. 4 by retirement plan managers that a six-year limitation for plan participants to sue over mishandling investments should be halved if participants had “actual knowledge” of the misbehavior complained of sooner.

In Retirement Plans Committee of IBM v. Jander, a lawyer for IBM employees who invested in company stock told the justices Nov. 6 that under ERISA, the employees should be able to sue managers of the company’s retirement fund in stock-drop litigation for not disclosing that the company’s microelectronics business was overvalued.