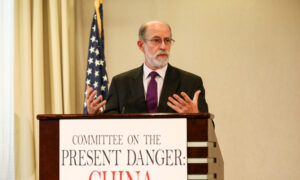 California is facing a pension crisis, and voters must push back to protect their retirement benefits before it’s too late, says California state Sen. John Moorlach.

“You’ve got to look at the way your city and your school district is being managed, and you have to see what you can do to change things, because they will eventually impact you,” Moorlach told The Epoch Times. “The last thing you want at 80 years of age is a postcard that says, ‘Sorry, we’re going to have to cut your pension by 30 percent.’ … That may be very difficult for a lot of people.”

Nearly 1 in 9 Californians belong to a public pension program, according to The Public Policy Institute of California. The trouble is, the state’s largest public pensions have a considerable amount of unfunded liabilities, meaning they might not have enough money to fulfill projected retirement payouts for current and former employees.

Most state employees are paying into their retirements through a defined pension plan, which allows them to put money away based on certain assumptions. Estimated retirement benefits are calculated through a variety of factors, including years of service and an employee’s ending salary. Cost of living adjustments are also taken into account.

Most Fortune 500 companies have dropped defined benefit pension plans because of one key reason: the assumption of an investment return, which isn’t guaranteed.

“We have had years where you have no return or a negative return, which means then you have to catch it up in future years,” Moorlach said. “And if you assume a high rate of return, then you will have a tough time catching up over time.”

Stick to the Plan

California ought to have learned a lesson, he said, from former Gov. Gray Davis, who in 1999 signed Senate Bill 400 (SB 400) to raise pension payouts for more state employees. More than 200,000 people became eligible for early retirement at age 55, and California Highway Patrol workers could suddenly retire at 50 while receiving 90 percent of their top public salary for life.

“The main retirement provider for state and local employees—and also probably the largest pension system in the U.S. if not the world—has now found itself two-thirds funded. It’s still at about 70 percent 20 years later,” Moorlach said. “It’s never been able to catch up.”

Davis later expressed regret publicly for signing the bill. It was approved during the dot-com boom, when the market was generating returns of up to 25 percent per year. The cautionary tale serves as a reminder that people shouldn’t make assumptions about pension returns, Moorlach said.

“People are kind of funny; they think that yesterday is today is tomorrow,” he said. “[They think] if my investments were 20 percent last year and are 20 percent this year, they’re going to earn 20 percent next year. Well that’s not how it works.”

Pension investments aren’t immune to the volatile stock market, and payoffs could be hindered by an underperforming market. In March, for example, the market dropped as the COVID-19 pandemic caused worldwide fear and uncertainty. A few months later, it recovered.

“Instead of [an employee] earning the 7 percent they’re supposed to earn, they [might] earn about 4.7 percent. But when you don’t meet your target in future years, the contributions that the employer and the employee have to make go up,” he said.

“And so the issue is, can we keep returning 7 percent on the investments, every year, you know, going forward? And it gets more difficult and it has been very difficult for pension plans around the world when interest rates are so low.”

Bonds could be a better option for pension plans, Moorlach said, but the tradeoff is that they tend to pay little interest. That means that plans might still have to turn to the stock market to reach their return benchmarks, said Moorlach.

“You have to rely on the stock market to make up the delta, and that gets really dicey and speculative,” he said. “It’s risky, and the more risk you take, the higher the return. You can win big; you can lose big, too. And when that happens … these pension plans will have a real difficult time.”

Actuaries are brought in to determine the types of changes pension programs need to make to balance payout projections. In some cases, that could mean future contribution increases by employers.

“Cities that are finding their pension plan contributions become such a large component of their budget because most of the budget is salaries and benefits for police and all the services that are provided by the city,” Moorlach said.

“And so, as those pension costs go up, other areas get crowded out. You may not see your roads repaired as quickly as you should, you may see your fire department having a reduction in personnel and the same with a police department. We’re seeing police forces and fire departments become smaller because of all these additional employee costs.”

He was speaking out to warn others about the repercussions of undervalued pensions.

“I’m trying to make sure that everybody wakes up and says, ‘Wait a second, we’ve got to modify going forward to protect what we have [if we want this to] be sustainable.’”