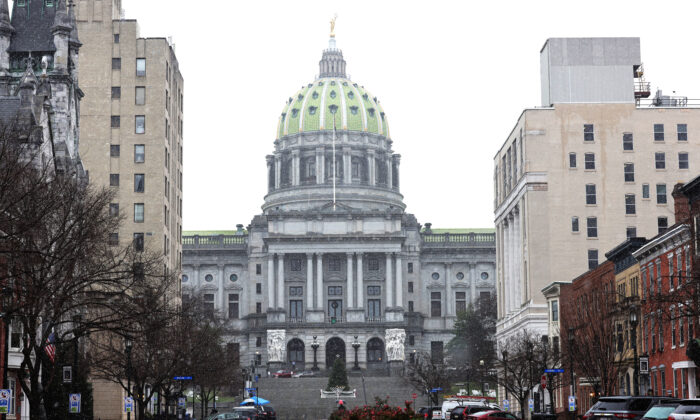 The top four polling Republican candidates for Pennsylvania governor met on April 27 in the Harrisburg studio of WHTM TV for a debate broadcast statewide. Nextstar Media Group, which sponsored the debate, only invited candidates who received at least five percent in either of the past two Nexstar or Emerson College polls.

McSwain, a former U.S. attorney who is polling the lowest of the four participating candidates, used much of his talking time in the first half of the debate to undermine the other candidates, aiming mostly at Mastriano and sometimes Barletta.

All candidates said they oppose abortion, support more fracking for natural gas, and believe they are the candidate most likely to beat state Attorney General Josh Shapiro in the general election. Shapiro is running unopposed in the Democratic primary.

Each candidate said they would have signed a bill that would have allowed Pennsylvanians to carry concealed firearms without a government-issued permit. They were also asked how they would stem violent crime, if not through tighter gun control.

White, a small-business owner, said he would ensure criminal law is enforced by district attorneys, and that if local prosecutors refuse to enforce the law, he would appoint a special prosecutor to do the job.

“I will go around them, work with the local police departments in whatever district it is, or municipality or city, and we will put the criminals behind bars,” White said.

McSwain said he would do what he did as a U.S attorney.

“I would enforce the law vigorously. It requires aggressive prosecution, deterrence, and accountability,” McSwain said. “It’s a small percentage that are committing almost all of the crime and we need to take a hard line with those individuals.”

Barletta, a former U.S. representative, agreed enforcing the law would curb violence, and he mentioned how troubled he was to see Gov. Tom Wolf walking with protesters holding signs opposing the police.

“The word will come from the very top—law and order. We will enforce the rule of law in Pennsylvania and that’s where it begins,” Barletta said.

Mastriano, a state senator, said he would call for enforcing current laws and supporting police.

“By standing with our brothers and sisters in blue when they enforce the law, and not turning on them as we saw in Gov. Wolf. We’re looking at fully funding the police but also expanding victims protection,” Mastriano said. “Some of these criminals get out of prison and victims aren’t even protected anymore, so that’s going to be high in my agenda.”

Candidates were asked their thoughts about Wolf’s proposal to attract business to Pennsylvania by cutting the corporate net income tax and what else they would do to bring employers to the state.

“We need to do that,” McSwain said. “The corporate net income tax is way too high. We’ve got the second highest corporate tax in the country. Only New Jersey is higher. That is a huge disincentive for businesses to be here and to locate here. And when you look at all of our economic rankings, whether it’s our tax burden, unemployment, population growth, or the growth gap—where we’re not growing as fast as the rest of the country—we’re near the bottom of the rankings.”

McSwain said the next governor should cut taxes and regulations to create a business-friendly environment.

Barletta agreed that the corporate tax should be lowered.

“I think we need to have somebody who actually has the experience, who’s actually governed in an executive position, and I’m the only one who’s done that for over 10 years as the mayor of Hazleton,” Barletta said. “We brought people in, and businesses in, through public-private partnerships. That was the tool that I used as a mayor and that’s what I’m going to do as our governor. We need to lower our corporate taxes, get the regulations down, and get regulatory agencies off the backs of our businesses, and we have to announce to the world that Pennsylvania is open for business again.”

Mastriano said he too would support lowering the corporate tax but he doesn’t believe Wolf will actually make it happen.

“For eight years, Tom Wolf has increased regulations and taxation in some way or another, with fees on our energy sector,” Mastriano said. “First, I’d unleash the potential of energy in Pennsylvania. That will drive costs down everywhere, including things that are delivered.”

“This is unsatisfactory. Everyone needs to get out there and work if you’re able. But we have to get the government off our backs, out of our wallets. That’s how you reopen the state, that’s how you open this state up for business.”

White reminded viewers that he is a businessman who signed the front of paychecks, not just the back. He has created jobs and knows what businesses need, he said.

“Yes. The corporate net income tax has to come down,” White said. “Infrastructure has to be fixed in this state. It is a disaster. Permitting has to be shortened. There has to be a time limit on permitting. Regulations have to be done away with—we have a lot of work on regulatory reform. I’m going to ask for the resignation of every department head in the state, and they’re going to have to interview for their jobs if they want it. If they’re not pro-growth, pro-business, pro-Pennsylvania, they shouldn’t be working here.”

White said he would also increase the workforce by attracting more people to vocational schools.

In closing comments, McSwain said Pennsylvania is at a fork in the road and it needs strong conservative leadership—a conservative outsider, rather than more politicians.

Barletta said he fought illegal immigration as a mayor when nobody in the country had the courage to do that. He didn’t back down then and that’s what is needed right now, he said, someone with the courage to fight for Pennsylvanians.

Mastriano said that he has shown his leadership style by often standing alone or with just a handful of colleagues, fighting to reopen the state, advocating for the elderly and for children, and fighting for election integrity, while taking criticism.

“We need somebody who’s not afraid to stand up to the left,” Mastriano said.