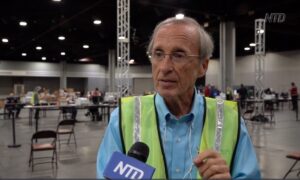 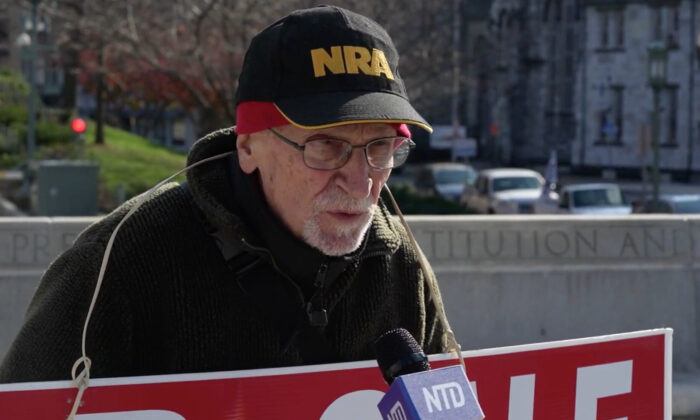 HARRISBURG, Pa.—Ed Snell was born in 1938, and says he’s seen the country through good times and bad.

“I was born in ’38, so I lived the beginning of the war, and Karen was born in ’42, so we saw, after the war, the country really blossomed. We lived the American Dream, and now these despicable creatures [the left] … they’re bringing our country to its knees,” he said at a Stop the Steal rally in Harrisburg, Pennsylvania on Nov. 28, 2020. Thousands have been protesting against election fraud every Saturday since Election Day.

Snell, who was a pro-life activist who only recently got interested in politics when Donald Trump made waves.

The people he’s been protesting with, “they’re solid grounded people, jobs in all kinds of industries … these are people who make our country what it is, and they’ve suffered, we’ve suffered, it’s terrible, what it is,” he said.

He decried billionaire elites who push policies that hurt the country. “I don’t know what their motives are … but I know this, my grandchildren and children won’t be so lucky. I’ve lived a good life and we’ve lived the dream but that’s about it,” he said. “If you’re a Pennsylvania politician, an elected official here, especially if you’re a Republican, but all of them here, there are wind changes here, so I’m saying to you: You better stand up. Or you’ll have nowhere to go after a while. There’s 72 million of us that are going to stand behind Trump, that’s why we’re here today, so come hell or high water you better do the right thing because you’re going to be out the door.”

Snell supports Trump because of the president’s pro-life stance, and willingness to fight for the right thing.

“He’s changed the United States forever, the country’s never going to be the same again. Because the country was just slowly going downhill with the politicians elected to office, both Republicans and Democrats. When Trump came, he was independent, he had his own money, and he had his own way of doing things. He’s tremendously brave, he’s fearless, he takes anybody on, including the mainstream press,” Snell said.

“We’ve had them stolen and burned and a guy came by with a big backhoe once and took them out. Whatever. I’ve got about 300 signs,” he said.