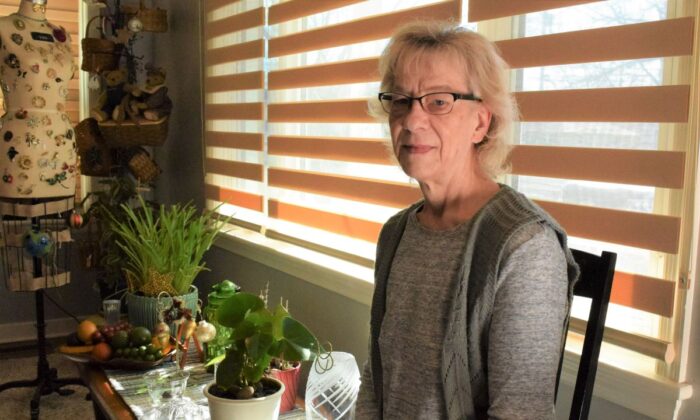 Rayne Barton vividly remembers a day when she was 5 years old, playing with other little girls near the train tracks in the city of Lancaster, Pennsylvania. Her own house was nearby, and her aunt lived around the corner. On this day, a large group of teenage boys came upon the girls, separated them, and assaulted them.

They threw Barton down on her back in the dirt. Two boys held her legs, and another sat on her waist and held her down at the elbows.

“There were two boys putting their fingers down my throat, putting dirt in my face, up my nose, in my ears, and stepping on my face. They flipped me over and started rubbing my face into the dirt where I just couldn’t breathe,” Barton told The Epoch Times. “I felt like I was going to die. I thought that was the end. At 5 years old, that’s what I thought. I didn’t know what was happening. I just knew that it was bad, and it was hurting, and I was scared to death.”

A police report was made. The incident prompted her parents to move out of the neighborhood to someplace that felt safer.

But since then, Barton said she has never really felt safe. She is reminded of the assault when she pulls a shirt over her head and it takes too long to slip past her face. Forget turtlenecks—too restrictive. She has never been able to wear a Halloween mask. Snuggling into bed at night, she makes sure the blanket is clear from her face.

Then COVID-19 came on the scene. Her fear was exacerbated with mandatory masking. Barton could not tolerate the mask so she just stayed home. Her husband did most of the shopping.

She tried making a mask with holes in it so she could breathe but that didn’t make her more comfortable.

She has sought counseling through the years but even now, at 62, she guards her face and avoids situations that would require her to cover it.

But she has to go to the doctor. Barton has diabetes, a pacemaker, kidney issues, and spinal stenosis. She has been going to the same group of physicians for 40 years at Penn Medicine, which is part of the University of Pennsylvania Health System.

Penn Medicine will not accommodate Barton’s need to be in control of her face. Instead, they have banned her as a patient from all but emergency services.

Barton has a cyst about the size of a grapefruit on the back of her knee, partially wrapped around a ligament. It’s painful and must be removed. In October 2020, she walked into Lancaster Orthopedic Group without a mask for an appointment about the cyst. A worker handed her a mask.

“I say to myself, ‘Rayne, calm down. You can do this.’ I’m talking myself through it because I need this thing taken care of. I put the mask on and I literally—I didn’t freak out, like I didn’t cause a scene—I just can’t do it. I thought, ‘I’m out of here. I can’t do it. I can’t do it.’”

She had a panic attack, ran outside, ripped the mask off her face and went home. Later, on the phone, she explained her hasty exit.

“I told them I’m unable to wear a mask because I was assaulted as a child. This is probably the first time I said it out loud to anybody. It just came out. I mean I just blurted it out. She said, ‘we can’t help you.'”

Without a mask, she could not get treatment and today the painful cyst remains untreated.

Barton was able to get some care through videoconferencing, but there are times the doctor must see a patient in person.

In spring of 2021, she needed some CT scans. At the first visit they let her in without a mask.

“I told them what I had happen as a child, and because of that I cannot put anything over my face,” Barton said.

The second time, a friend drove her to the appointment. Barton was told she would have to wear a mask.

“At the second one they were not going to let me in, and I said ‘Yes, I can be here.’ I didn’t curse, but I have a sharp tongue and I was able to get the [CT] scan done, but I had to walk outside to go into another door that was right at the end of the hallway.”

This way, she didn’t come in contact with other patients.

To get care, she had to tell the trauma story that she had kept private for decades, out loud again, to a stranger and in front of a friend who didn’t know Barton’s history until that day.

In December 2021 Barton went to Lancaster Neuroscience & Spine Associates to meet with a neurologist to discuss a plan for treating her spinal stenosis.

“They said I couldn’t go in without a mask because the doctor I was going to see just got back from getting chemo and we can’t risk her,” Barton said. “Why is she working if she’s that fragile? Why is that my responsibility? I don’t understand that.”

Barton wanted treatment and refused to leave. The office called the police.

“The cops came, and I said I’m not leaving. I’m staying here. I have a right. It isn’t my fault what happened to me. I’m tired of being treated like this.”

Barton’s husband noticed the police arrive and went inside.

“He says, ‘Rayne, what’s going on here?’ I said, ‘they won’t let me get treatment because I can’t wear a mask.’ He says ‘Rayne, if the spinal stenosis isn’t going to kill you, having a heart attack right now will. Let’s get out of here right now.’ So he talked me into leaving.”

A few weeks later she tried to set an appointment with another Penn Medicine doctor on another matter, but the scheduler told her the computer would not let her. Barton has not been able to set any more appointments with her general practitioner, cardiologist, or any of her doctors.

In a letter dated Feb. 10, 2022, Penn Medicine notified Barton that the office had cancelled a procedure Barton had scheduled for the next day, saying it had tried to accommodate her by offering a rapid COVID-19 test in her car. If the test came back clear, they would put her in a separate waiting area to prevent exposure to others. But the test involves a swab pushed deep into the nose and Barton said she knew she would not be able to handle it.

“You declined all of the described accommodations and indicated your refusal to participate in pre-procedure COVID-19 testing. Absent your cooperation, we are unable to treat you for non-emergency needs,” the letter said.

The letter stated: “You have refused our offers to accommodate and have been rude and argumentative to staff. We no longer believe that we are able to work together regarding your health care needs. You are prohibited from being on the property or entering any LG health facility with the exception of Lancaster General Hospital emergency department. In the event of a medical emergency you may always seek care at Lancaster General Hospital emergency department. We will happily facilitate the transfer of your records to an alternative provider.”

Barton didn’t know where to turn, so she made about 30 to 40 calls to Lancaster General Health CEO John Herman but was never able to connect with him directly.

That was followed by a March letter from Kathryn Weinrich, executive director of legal services at Lancaster General Health, warning Barton that her calls to Herman were harassment and that she is to have no further contact with the organization. She is not to call or step foot in any facility related to the University of Pennsylvania Health System, University of Pennsylvania School of Medicine, Lancaster General Health, and other named satellite offices.

The Epoch Times asked Penn Medicine in an email if it has any trauma-informed training or policies in place to work with patients who have experienced traumatic events, and also asked how many patient relationships Penn Medicine has terminated due to the patient’s inability to comply with COVID-19 mitigation requirements.

John Lines, director of public relations and corporate communications at Penn Medicine Lancaster General Health, provided the following statement: “While we are unable to discuss specific patient situations, we follow CDC guidelines for patients and visitors, including guidelines for accommodations that enable the delivery of effective care while ensuring the safety of all our patients and providers.”

Barton must have her pacemaker checked every four months, but it’s been two years. Her prescriptions are running out and none of her doctors are allowed to refill them.

“I’m not taking my medicine. There’s nothing I can do,” Barton said. “I’m so tied with Penn Medicine. I’ve been under their umbrella and part of their family for the last 40 years, and if my family can’t take care of me, surely a stranger can’t.”

She doesn’t have the energy or will to travel farther and find new doctors, who will likely have the same masking policy. She wants to stay with the doctors who know her and whom she has worked with for years. It has been especially hard to lose her long-time general practitioner. She has made the decision to go without treatments and medicine.

“If they can call me and tell me to come get treatment without a mask, I’ll go. But I’m not going to stand and fight for it anymore. I’m tired. I’m too old to have to fight for medical care.”