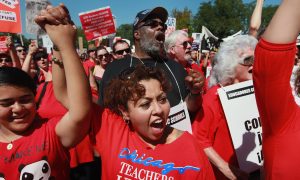 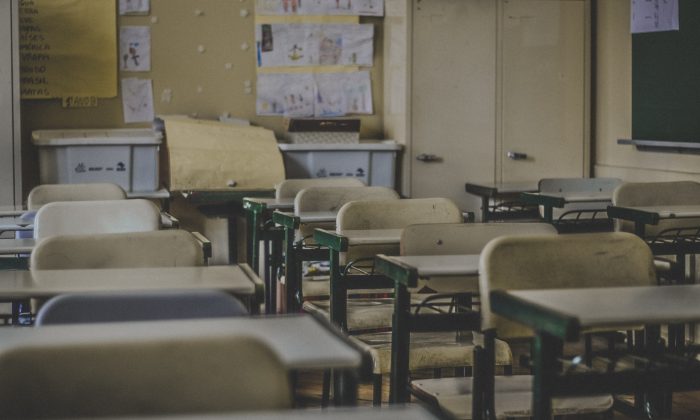 Stock photo of a classroom. (Feliphe Schiarolli/Unsplash)
Crime and Incidents

A York County Pennsylvania teacher has been charged with terroristic threats for allegedly threatening to kill people after a plastic barrier to protect from COVID-19 was removed from his classroom.

Sinking Spring Elementary School teacher Chad Gerrick, 50, erected a plastic barrier in his classroom as protection from COVID-19 but the school maintenance department removed the barrier, angering Gerrick, according to a police criminal complaint obtained by The Epoch Times.

After discovering the barrier was removed early Friday morning, Gerrick had a conversation with school administrators and then went to the cafeteria where a cafeteria worker heard him making threats to school officials, including, “If I get COVID, I will shoot all them (expletive),” at the Central York School District administrative offices. And, “I don’t care how sick I am, I will come in to school and spread COVID to everyone that I can,” the complaint said.

The cafeteria worker reported the comments to administrators and made a written statement.

Security escorted Gerrick to a meeting with police present in the room. Acting School Superintendent Ryan Billet told Gerrick that he was under investigation for making threats and that he was being suspended. Gerrick made no comments.

After Billet was done, a police officer told Gerrick he was under investigation for making terroristic threats and that he was going to read him his Miranda rights and give him a chance to make a statement. Gerrick immediately said he wanted to have an attorney present before making a statement, the complaint said.
Gerrick was taken to York County Central Booking, processed, and awaited arraignment.

Police executed a search warrant on his vehicle, which had been parked at Sinking Springs Elementary School. No weapons were found in the vehicle. Shortly after that, police searched his home and removed nine long guns and one pistol from the home.

Students at Sinking Springs Elementary are taking classes at home for the rest of the week due to a spike in COVID-19 cases. During the closure, the custodial staff will clean and sanitize the building to prevent the spread of COVID-19, the school website said.