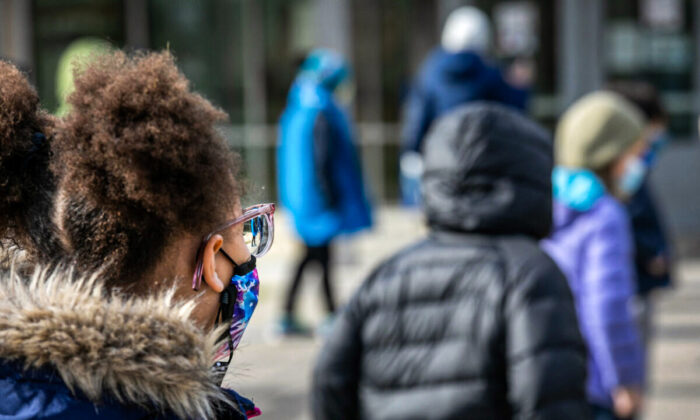 A child wears a mask at Rogers International School in Stamford, Conn., on Nov.19, 2020. (John Moore/Getty Images)
By Beth Brelje

The Pennsylvania Supreme Court affirmed on Dec. 10 a Commonwealth Court decision that stated that Acting Health Secretary Alison Beam didn’t have the authority to issue a mask mandate for everyone indoors at schools and child care centers.

The ruling means that, effective immediately, school mask-wearing is no longer mandatory, although many school districts have a local rule that students who wish to wear a mask may still do so.

The suit was brought by Pennsylvania Senate President Pro Tempore Jake Corman, a Republican running for governor. It was filed personally, as a parent, along with other parents, and not as part of a Senate action.

“With today’s ruling, the power for parents and local leaders to make health and safety decisions in our schools is restored,” Corman said in a statement.

“That power comes with an obligation to review the facts and act in the best interests of our communities—which is why legislative leaders sent a letter to Governor Tom Wolf yesterday to reconvene the COVID-19 Vaccine Task Force. I encourage all stakeholders to review the needs and conditions in our communities to make the best choices for our kids.”

Wolf recently announced that he would return masking decisions to local school leaders on Jan. 17, so some people were surprised when the state’s Department of Health appealed the Commonwealth Court’s decision and continued fighting for the mandatory mask mandate.

While the state battled in court to keep masks on kids, educators gathered on Dec. 6 without students and appeared unconcerned about masking.

Secretary of Education Noe Ortega had announced that Elizabeth Raff, an educator at Penn Manor School District in Lancaster County was named the 2022 Pennsylvania Teacher of the Year.

The announcement was made during the Standards Aligned System Institute, the Pennsylvania Department of Education’s annual professional development conference. Photographs from the event, provided by the state, show teachers and state employees gathered without masks or social distancing.

Raff teaches sixth-grade English language arts and social studies at Pequea Elementary School. She was chosen from among 12 finalists. She’ll travel the state, meet and collaborate with other educators, and represent Pennsylvania in the 2022 National Teacher of the Year competition.