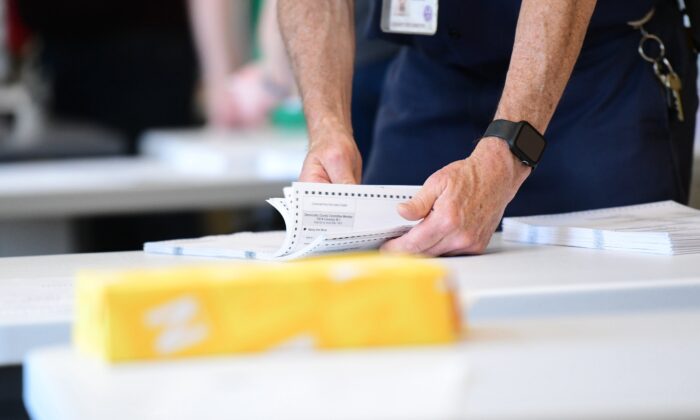 The Supreme Court of Pennsylvania has quietly dismissed Republicans’ application to overturn a lower state court’s order requiring that absentee and mail-in-ballots that lack a date handwritten by the voter be counted.

Pennsylvania was a hotbed of election-related litigation during the 2020 presidential election. Although former President Donald Trump won the state in 2016, President Joe Biden won it in 2020, according to official results.

Barring any unforeseen future developments, the ruling means that even though Pennsylvania law requires that ballots that arrive without a signed, dated declaration from the voter are to be discarded, such ballots will be counted in upcoming elections.

The ruling came on June 10 as the court accepted former hedge fund CEO David McCormick’s request to discontinue litigation still pending before the court after he narrowly lost a Republican primary contest for a Pennsylvania seat in the U.S. Senate seat against celebrity heart surgeon Mehmet Oz.

McCormick conceded the race to Oz on June 3, and after a recount, state election officials declared Oz the winner by 951 votes on June 8.

The June 2 order was by President Judge Renée Cohn Jubelirer, a Republican who sits on a lower court, the Pennsylvania Commonwealth Court. In a 40-page memorandum opinion (pdf), Jubelirer laid out the legal issue.

She wrote: “Sections 1306(a) and 1306-D(a) of the Pennsylvania Election Code provide, respectively, that, after an elector marks their ballot and secures it in the secrecy envelope, the elector is to place that envelope into a second envelope (outer or exterior envelope) on which, among other things, is printed a ‘declaration of the elector’ which ‘[t]he elector shall then fill out, date and sign’ … Whether ballots can be counted that do not contain a handwritten date on the outer envelope as described in these sections is the issue.”

Republicans have a history of insisting that state election laws be enforced strictly.

The Republican Party of Pennsylvania wrote on Twitter on May 23 that the state party would support whoever wins the Senate primary, but “we absolutely object to the counting of undated mail-in ballots. Pennsylvania law and our courts have been very clear that undated ballots are not to be counted. We have worked hard towards restoring confidence in our elections, and we call upon everyone to respect, uphold and follow the clear law on this issue.”

But McCormick went in the opposite direction, asking the Commonwealth Court to declare that absentee and mail-in ballots received on time but lacking the required dated declaration from the voter be counted. McCormick argued that Pennsylvania’s dating provisions were unenforceable under both state and federal law.

Jubelirer concluded that McCormick and his campaign “established that they are likely to succeed on the merits,” and this conclusion “weighs heavily in favor” of their request for an injunction requiring election officials not to discard ballots lacking the required date.

The state’s “Election Code should be liberally construed so as not to deprive electors of their right to elect the candidate of their choice. The power to throw out a ballot for minor irregularities should be used very sparingly, and voters should not be disenfranchised except for compelling reasons,” Jubelirer wrote.

Jubelirer ordered election officials “to segregate the ballots that lack a dated exterior envelope” from those with a properly completed dated declaration and report two vote tallies to Chapman, who as chief election officer would presumably make a decision later about which ballots to include in the official count.

It was unclear at press time if the Supreme Court of Pennsylvania provided reasons for its June 10 decision.

The post came after the U.S. Supreme Court on June 9 allowed officials in Pennsylvania to resume counting disputed undated mail-in ballots in a state-level judicial election that took place last year in Lehigh County, as The Epoch Times reported.

On May 31, Justice Samuel Alito temporarily stayed a May 27 ruling of the U.S. Court of Appeals for the 3rd Circuit that had allowed election officials to count undated mail-in ballots in the race, but on June 9, the full Supreme Court vacated the stay, allowing the count to resume.

“If left undisturbed, it could well affect the outcome of the fall elections, and it would be far better for us to address that interpretation before, rather than after, it has that effect.”

It follows, Alito added, that a state’s “refusal to count the votes of these voters does not constitute a denial of ‘the right to vote.’”