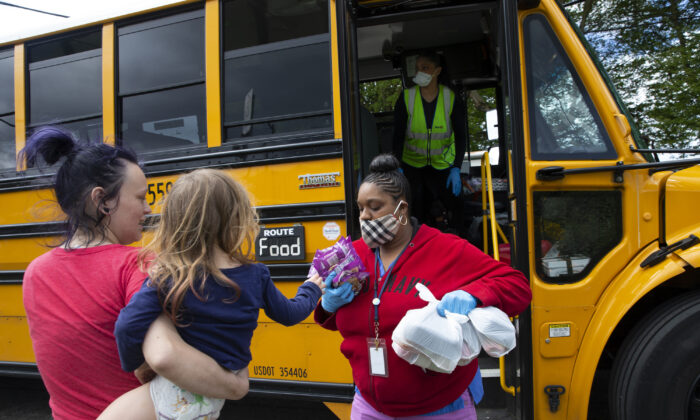 A school bus driver delivers meals to children and their families in Seattle, Wash., on May 6, 2020. (Karen Ducey/Getty Images)
US News

Pennsylvania’s health and education departments clarified an earlier statewide mask order, saying that students age two and older have to wear face coverings at all times at school, with few exceptions.

According to an updated guideline by Pennsylvania Department of Education, schools may allow students over two years old to remove their face coverings under very specific circumstances. Those scenarios include while eating or drinking spaced at least six feet apart, or during an activity that would make wearing a mask unsafe. Students can also take their masks off during a 10-minute, physically distanced “face-covering breaks.”

The new mask rule must be implemented by all school districts “immediately” prior to the start of the upcoming school year, the department said. The order applies to students, teachers, staff, as well as student athletes and their coaches, whenever they are not “actively engaged” in games or workouts.

When asked about the update during a Tuesday press briefing, Pennsylvania’s Secretary of Health Rachel Levine called it a “clarification” of a mandatory mask order issued by Gov. Tom Wolf in July, saying that she understands the original language of the order “wasn’t as clear as it could be.”

“We’ve had enough questions that we wanted to clarify that we mean that when the young people are wearing masks, that they are wearing masks. That [when] they’re in their classroom, even though they’re 6 feet apart, they should be wearing their masks,” Levine said. “We wanted to make sure that our advice was crystal clear, so we put out the guidance.”

“For our schools that are bringing kids back to the classroom, or having some type of blended classroom where some kids are back, it is critically important that they follow the same guidelines that I talk about every day: masks, social distancing, hand-washing,” she added.

The update comes as school districts across the commonwealth are planning to bring students back to classroom this fall. As of Monday, 657 school districts, public charter schools and career and technical centers have submitted their reopening plans, reported The Associated Press, citing the Education Department. At least 35 percent of them have indicated they are preparing for a full return of students to the building for five-days-a-week, in-person learning.

Pennsylvania’s universal mask order went into effect July 1, requiring all residents to wear masks in any public setting. Wolf said at that time that the face-covering mandate may remain in the commonwealth until a vaccine to the CCP (Chinese Communist Party) virus becomes available.