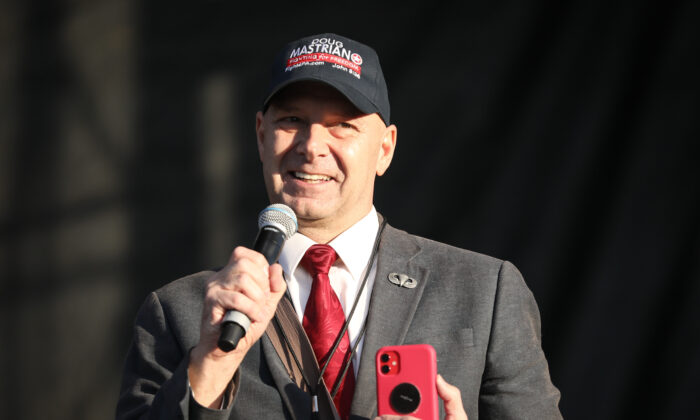 Doug Mastriano, Republican member of the Pennsylvania Senate, speaks at a rally on the National Mall in Washington on Dec. 12, 2020. (Samira Bouaou/The Epoch Times)
By Zachary Stieber

A Pennsylvania state senator says he intends to ask a panel he chairs for the authority to issue subpoenas to compel counties to cooperate with his efforts to investigate the 2020 election.

“We’re eagerly awaiting my committee coming together when I can get a quorum, get everyone’s calendars matched up—it is summertime. As soon as I get a quorum, we will have a meeting, we will vote on subpoenas, and let the fun begin,” Pennsylvania Sen. Doug Mastriano, a Republican who chairs the state Senate’s Intergovernmental Operations Committee, said on One America News last week.

Mastriano initiated a forensic probe of the 2020 and 2021 elections in early July by sending requests for materials such as ballots and for access to voting machines to Tioga, York, and Philadelphia counties.

But officials in all three counties are refusing to comply, setting up the need for subpoenas.

Mastriano set a deadline of July 31 in his letters to the counties.

York County commissioners indicated in mid-July that they wouldn’t send materials to Mastriano or give him access to voting machines. Tioga County officials said on July 29 that they wouldn’t allow Mastriano’s panel to access machines unless the state Senate authorized funding for new machines. And the Philadelphia City commissioners voted against voluntary participation in the audit on July 30.

“Philadelphia County’s participation in your proposed analysis would be duplicative of extensive efforts already undertaken by the Philadelphia County Board of Elections, the Pennsylvania Department of State, state and federal courts, and your colleagues in the Pennsylvania State Senate. Participation could also impair our ability to operate fair and secure elections in Philadelphia,” Lisa Deeley, a Democrat commissioner, wrote in a July 30 letter to Mastriano.

Previous election reviews have shown no issues with the 2020 election, Deeley noted.

County officials have cited the threat of machine decertification as one of the reasons they won’t comply. Philadelphia officials said replacing the machines would cost more than $35 million. Acting Pennsylvania Secretary of State Veronica Degraffenreid, an appointee of Democratic Gov. Tom Wolf, decertified Fulton County’s machines in July after they agreed late last year to an election assessment based on a request from Mastriano.

Wake Technology Inc., a Pennsylvania-based company, carried out the assessment. But that access wasn’t authorized and prevents Dominion Voting Systems, whose machines are used by the county, from “affirming that the system continues to meet state and federal certification standards,” according to Degraffenreid.

Mastriano has said that the pressure on counties from the executive branch is a form of intimidation.

Wolf and the secretary of state “are trying to threaten and bully” the counties, he told reporters at a recent press conference.

Stuart Ulsh, a Republican commissioner in Fulton County, noted that the machines there weren’t compromised or tampered with. Wake workers performed the review under the strict supervision of county officials, he said.

Ulsh alleged that officials with the Pennsylvania Department of State had asked him to remove from the county’s website the report Wake produced on what they had found.

“It makes you wonder what you’re trying to hide,” he said.