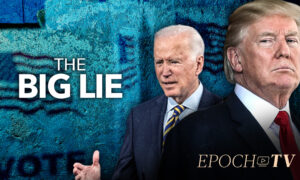 Pennsylvania state House Republicans will make another attempt at passing a voting overhaul bill after Democrat Gov. Tom Wolf signaled he would support a measure that includes voter identification provisions.

House State Government Committee Chairman Seth Grove on Wednesday told other lawmakers in a memo that he’ll reintroduce a bill that Wolf vetoed last month. Other than proposing new voter identification requirements, the bill would move up the voter registration deadline, limit drop-box usage, and would allow for the precanvassing of mail-in ballots.

Grove, in the memo, noted that Wolf recently told the Philadelphia Inquirer that he isn’t opposed to voter identification requirements—namely for mail-in voting.

“While this revelation would have been more welcomed a month ago as the General Assembly was moving HB 1300 of 2021 through the legislative process, it is a productive development,” Grove said, referring to the governor’s interview. “The Pennsylvania Voting Rights Protection Act is solely predicated on the House State Government Committee’s extensive election oversight hearings, the most extensive election oversight work in the entire country,” the York Republican added.

Current law only requires voters in Pennsylvania to show identification when they vote for the first time, whereas the new bill proposes mandatory voter identification for every election. And, according to Grove’s statement, the bill will also include $3.1 million in state funding to create and manage a Bureau of Election Audits.

Although Wolf signaled he’s open to discussions, other Democrats pushed back against Grove’s latest proposal.

Senate Minority Leader Jay Costa, a Democrat, told local media that he has “serious concerns” about the voter identification provision and described it as a measure designed to make it more difficult for people to vote.

“Based on our experience, the last time the majority in the General Assembly tried this, it lacked broad accessibility and discriminated against vulnerable segments of the population,” Costa told the Capital-Star newspaper. “So I stand by our position on HB 1300 as it was passed as well as the effort in 2012 that was found unconstitutional.”

On Wednesday, Wolf’s office sought to clarify his remarks to local outlets. A spokesperson said Wolf only would support a GOP-backed measure with voter identification requirements if the bill makes it easier for people to vote.

“His comments were not a seismic shift in policy,” Wolf spokeswoman Lyndsay Kensinger said. “They simply reflect a willingness the governor has expressed for well over a year to engage in good faith to try to find common ground.”

The Epoch Times has contacted Wolf’s office for comment on Grove’s proposal.