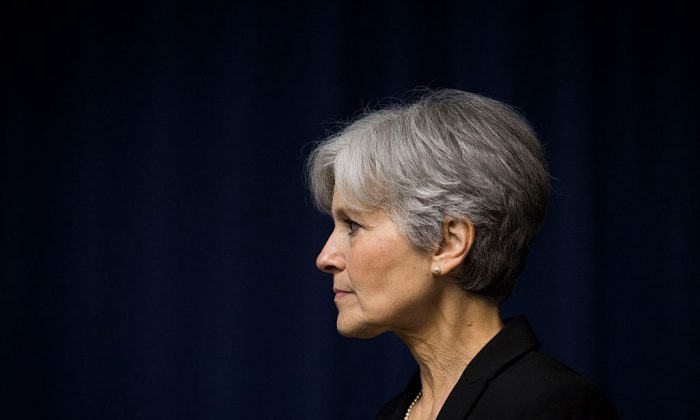 Jill Stein is seen after she announced that she will seek the Green Party's presidential nomination, at the National Press Club in Washington, DC., on June 23, 2015. (Drew Angerer/Getty Images)
Politics

The Green Party has dropped its push for a recount in Pennsylvania, according to court documents released on Saturday.

The party’s presidential nominee, Jill Stein, attempted to secure a recount after claiming there were possibly voting irregularities or voter fraud, without providing evidence. Stein also pushed for a recount in Michigan and Wisconsin, which along with Pennsylvania, were won by Donald Trump by a slim margin.

CBS Pittsburgh said that Stein is planning to make the announcement about the Pennsylvania recount on Monday in front of the Trump Tower in Manhattan. Stein won only around 1 percent of the vote total.

Stein, who set up an online fundraiser to generate more than $6.5 million, criticized the court’s requirement of $1 million bond to start the recount. The court said that the money is due on Monday, CBS reported.

“The judge’s outrageous demand that voters pay such an exorbitant figure is a shameful, unacceptable barrier to democratic participation,” Stein said in a statement, reported Politico. “This is yet another sign that Pennsylvania’s antiquated election law is stacked against voters. By demanding a $1 million bond from voters yesterday, the court made clear it has no interest in giving a fair hearing to these voters’ legitimate concerns over the accuracy, security and fairness of an election tainted by suspicion.”

State officials previously said it would cost $500,000 to recount the votes.

Wisconsin’s recount efforts started on Thursday, while a recount could start in Michigan sometime next week.

Pennsylvania’s Republican party released a statement on Saturday about the recount.

It read: “The filing of a discontinuance of the Election Contest by Jill Stein’s petitioners tonight is a recognition that their Election Contest was completely without merit, and meant solely for purposes to delay the Electoral College vote in Pennsylvania for President-Elect Trump…Candidate Jill Stein’s allegations created the false allusion that some unidentified foreign government hacked our state’s voting systems when absolutely no such proof existed. We believe that she always knew that she had no such proof.”