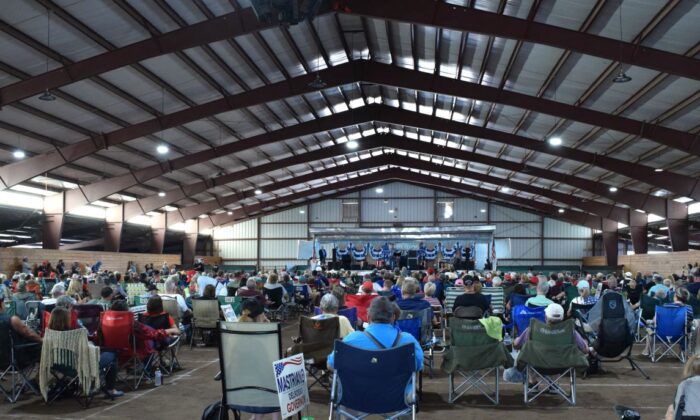 BLOOMSBURG, Pa.—Audit the Vote PA founder Toni Shuppe started her speech with a question: “Who here believes Donald Trump won the 2020 election?” A crowd of over 1,000 people, some wearing “Trump Won” T-shirts, cheered and raised their hands.

Shuppe spoke on Saturday to a gathering at the Keystone Horse Center in Bloomsburg, Pennsylvania, organized by the Pennsylvania Patriots Coalition, an umbrella organization of over 100 separate patriot groups across the state. The theme of the all-day event was election integrity.

The left’s claim that 2020 was the most secure election in U.S. history is met with skepticism by these folks—many of whom have now studied election procedures and scrutinized anomalies in the 2020 election. And while they say both parties should care about election integrity, Democrats demonize their research.

“The other side won’t work with us on election integrity because they don’t think there is a problem,” said Shuppe, a self-described regular mom who used to be disinterested in politics.

“I got engaged in politics when it affected my life,” Shuppe said. She was talking about restrictions brought on by the COVID-19 pandemic. “People don’t know their constitutional rights. So, when they said we couldn’t gather in groups more than 10, we didn’t recognize our right to say no.”

For many, government-imposed COVID restrictions like mandatory masking, shots, and closing businesses, were a wake-up call that government has become too invasive. Once awake, the 2020 election was the first thing they saw. Newly implemented election procedures such as drop boxes and no-excuse mail-in voting felt like more government overreach and tools for cheating.

Soon after the 2020 election, three moms, Shuppe, Karen Taylor, and Jamie Sheffield, launched an online petition calling for a full forensic audit of Pennsylvania’s election results. In four months, the petition had over 100,000 signers and they knew they were not the only ones who thought something was amiss with the election that put President Joe Biden in the Oval Office.

Through research, public records, and interaction with those in office, Shuppe came to believe that there was a concerted effort to hide the truth of election fraud in Pennsylvania.

But the rally was not about looking back. Saturday’s rally was a call to action for those who care about the direction of the country, to get involved and help stop election tampering.

“The fix is local,” Shuppe said. She told the crowd to become poll workers, go to county meetings and get familiar with election procedures.

Catherine Engelbrect, founder of True the Vote, the research group behind the film “2,000 Mules,” started investigating election integrity years before 2020. Like other speakers, she called for action from citizens.

“It’s not going to get fixed by the people who broke it, and benefit from it,” Engelbrect said of election interference.

The Epoch Times asked attendees: if there was cheating in the 2020 election, what prevents cheating in the future? How can Republicans expect to gain a majority? How would former President Donald Trump get elected again?

“There was plenty of proof of cheating in 2020,” Randy Osenbach of Columbia County told The Epoch Times. “But most Republican [leaders] were cowards. Judges were cowards. It was pitiful and it emboldened the Democrats. I see a red wave coming, but I’m sure the Democrats have something up their sleeves to try and make sure it doesn’t happen.”

Diane Chapogas of Monroe County said counties should get rid of ballot drop-boxes and require identification to vote. “We should return to hand-counting ballots and have smaller precincts so we can get results the night of the election,” Chapogas said.

Kerri Wilson, who serves on the Monroe County Board of Election says both Democrats and Republicans should have poll watchers present on election day.

Dave Hendel, judge of election in Upper Macungie Township in Lehigh County, says he knows for sure there won’t be problems in his township because he will personally watch, and adds it is a matter of more people getting involved in the process.

This simplified voting, which worked well historically, was mentioned by many people.

But if they don’t go, ballot boxes should be watched by patriots, Diane Fisher of Carbon County told The Epoch Times. The Coalition of Patriots is advising citizens to adopt a drop box, take shifts watching, and report suspicious activity.

“Voting machines need to go. Mail-in voting needs to go. It should be in-person voting with ID and paper ballots only,” Fisher said. “I think elections are winnable, but we have to watch.” She believes election corruption goes deeper than the Democrats. Fisher believes the FBI and Department of Justice may be involved in steering elections. “Now watch. They’ll be at my door next week,” she said.

One woman, Lydia, would only share her first name.

“I feel it will be up to us to step up to the plate and, with God’s help, stand up for what is right, with the Lord. He is going to fight for us,” Lydia said. She believes that ultimately, God chooses our leaders, even Joe Biden, whose presidency has opened the eyes of many people and revealed how the world works. “This had to happen so we can see the evil that is among us,” she said.