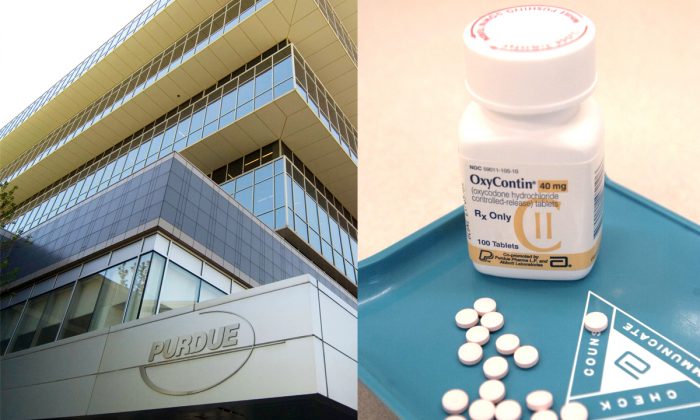 The Purdue Pharma offices in Stamford, Conn., on May 8, 2007. In 2007, the company pleaded guilty and agreed to pay more than $600 million in fines for misleading the public about the risks of OxyContin. But the drug continued to rack up blockbuster sales. (Douglas Healey/AP Photo; Darren McCollester/Getty Images)
US

Pennsylvania Opioid Debate May Include Push for Pricier Pill

HARRISBURG, Pa.—Pennsylvania’s fight against opioid addiction may include a measure that could pave the way to more expensive prescriptions for supposedly abuse-resistant painkillers whose effectiveness in curbing abuse is unclear.

The bill, which passed the House nearly unanimously in June, is awaiting action in a Senate committee and has the support of Gov. Tom Wolf as he presses lawmakers to pass a package of legislation this fall.

It has been lobbied in the Senate by at least one major pharmaceutical company—Purdue Pharma, maker of Oxycontin—and is similar to legislation shopped by drugmakers in as many as 20 other states.

According to its chief House sponsor, it sprang from the recommendations of a 38-member opioid task force and advisory committee he helped assemble. The group met in private, held no public hearing and included pharmaceutical industry representatives.

The sponsor, Rep. Doyle Heffley, R-Carbon, said he believes it will save lives.

“It’s not going to be the end-all be-all,” Heffley said. But “if a doctor feels the need to prescribe it in an abuse-deterrent form, why we wouldn’t want the doctor to do that?”

Under the bill, any health insurance plan that covers an opioid painkiller must also cover three abuse-deterrent painkillers, a patented formulation that costs more than generic formulations.

The House held no hearing on the bill. That’s despite insurance industry complaints that it would drive up premiums, and the U.S. Food and Drug Administration’s observation that abuse-deterrent painkillers don’t prevent a common form of abuse—swallowing pills whole.

Still, the FDA is encouraging the development of abuse-deterrent formulations, to prevent crushing and snorting or dissolving and injecting. Asked about the bill, Purdue Pharma said it supports policies that align with the federal government’s view that “opioids with abuse-deterrent properties are a public health priority.”

Skeptics warn that abuse-deterrent painkillers carry the same risks of addiction as opioid versions that lack such properties. Dr. Andrew Kolodny, the executive director of Physicians for Responsible Opioid Prescribing, called them a “waste of money” and pharmaceutical industry “profiteering off the addiction crisis.”

“Addicts almost always begin with swallowing pills whole, and the fact that that’s on the menu suggests to me that pharmaceutical lobbyists have been very successful in Pennsylvania,” said Kolodny, who also is the senior scientist at Brandeis University’s Heller School for Social Policy and Management.

New Jersey Gov. Chris Christie vetoed a similar bill in January, saying the benefits of the abuse-deterrent drugs “are still uncertain” in the medical community.

Philadelphia-based insurer Independence Blue Cross said it already provides coverage for abuse-deterrent opioids, typically at a cost of three to five times more. But it noted that there are videos, blogs and other information online on how to circumvent abuse-deterrent properties.

A joint investigation by The Associated Press and the Center for Public Integrity found that drugmakers that produce opioid painkillers and allied advocacy groups spent more than $880 million on campaign contributions and lobbying over the past decade as they worked to influence state and federal policies.

The Pennsylvania bill is part of a new legislative frontier for the lobbying efforts of pharmaceutical companies, including Purdue Pharma, the company whose executives pleaded guilty in 2007 to misleading the public about OxyContin’s risk of addiction.

It also included people who specialize in drug-abuse prevention, members of law enforcement, representatives of major professional medical associations and Wolf’s secretary of the Department of Drug and Alcohol Programs.

The task force held no public hearings or meetings. Rather, it met in private, with no publicly available transcripts or minutes of its meetings where it developed its recommendations, said Glenn Pasewicz, the executive director of the Joint State Government Commission, which organized the task force meetings and report.

Records from the private meetings are not subject to the state open-records law, Pasewicz said.

Heffley introduced the bill in February. Less than five months later, it passed the House, 190-3.