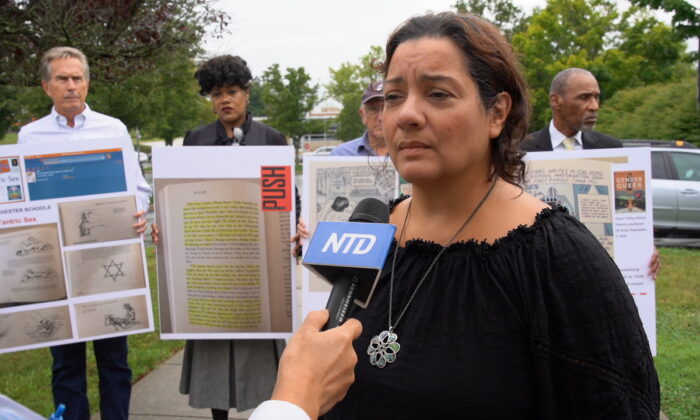 MALVERN, Pa.—On Sept. 7, a Pennsylvanian mom, Fenicia Redman, went to Great Valley high school to protest after she received the order that her request for Emergency Injunctive Relief was denied by the U.S. District Court in the Eastern District of Pennsylvania.

“I want to alert all Pennsylvanian moms and grandparents and adults that right here behind us is a scene of a crime. I remind, your children are being exposed to material that no innocent child should see,” she told people at the protest.

Redman also filed a motion for a nationwide injunction, which was denied on Aug. 29.

“This Court cannot discern from its review of Plaintiff’s complaint any claims for which she has shown a ‘better than negligible’ likelihood of prevailing on the merits,” wrote the denying order.

Redman told The Epoch Times that her emergency injunctive relief was denied because she is not a lawyer and had no experience in the lawsuit. She took two weeks to file the 99-page complaint by herself. Now, Redman is looking for more funds through “GoFundMe injunction mom” to have a lawyer to represent her.

Redman’s protest was supported by numerous people in the community, including a pastor who is a Democrat, a former president of the Great Valley school board, a retired policewoman, a grandparent, and a few others. They all held a protesting poster and shared their concerns with The Epoch Times.

Former School Board President: I Will Get Rid of Pornography

Bruce Chambers was the president of the Great Valley School Board for two years. He has been protesting for months against obscene material at school, and said he is not satisfied with the current school board.

“The worst part of it is that they pay no attention to people like Fenicia, who come to speak,” he told The Epoch Times.

Chambers said if this had come up when he was on the board 10 years ago, he would have immediately made it an agenda item. “We would have had a deep discussion about it. And we would have made a decision and I would have pushed them to get rid of this stuff. It’s garbage. We can’t have this in the school, as the other people have said it’s very obvious. It’s pornography. It’s child pornography.”

Chambers said he used to investigate child pornography in his job as a United States Postal Inspector. “So I know what it is. And this fits the criteria for pornography.”

He thinks the majority of the people in this country don’t want obscene materials at school, but the administration here pushed this to happen. “They do other things that are very wrong: they have secret meetings with middle school kids who seem to be asking questions about gender nonconformity” without telling the parents, Chambers said.

He said he’s very grateful for Redman’s efforts: “I admire her greatly for taking up this cause, and for putting up with what she’s had to put up with from the school district and the school board. It’s admirable that she’s still fighting this fight and she’s going to continue on.”

Pastor Frank E. Legette III is a life-long Democrat who was one of the protesters at the Capitol in Harrisburg with Fenicia Redman when the Police demanded they remove the obscene posters on June 20, 2022.

Legette recalled the Capitol police officer came in and declared that they had to not only take them down but to put them away. Because this material was offensive. He cannot accept why the school can be allowed to show these pornographic materials to innocent children.

“The worst part about this is that the educational system has decided that parents have no say so in this issue, that the educational system can peddle this pornographic material to our children. But the parents don’t have any recourse and they can’t push back against it. Because the system has decided that this is acceptable and has literary value. That’s criminal,” Legette said. “We have lost our moral compass in this country.”

Legette said if he offered a sex education class and passed out this material in his church, “the parents would call the police, have me arrested and I would be fired from my job. That’s how serious this is.” He has been a pastor for 38 years in Pennsylvania and New Jersey.

Legette treats Redman as a champion, “She’s the champion that’s going to lead the cause and we’re following her.”

Retired Policewoman: ‘This Would Go to Special Victims’

Alfe Goodwin was a police officer in Philadelphia for 14 and a half years. She retired on Feb. 1 this year. She pointed to the poster she held, “It’s obscene. period. When I was on the job if I had received a call from a parent, saying that another adult without their consent expose their children to this material, definitely it would have been a job that would have gone to special victims, period. There’s no other way to look at it,” Goodwin said. “It’s inappropriate material for children.”

Goodwin expresses her gratitude for what Redman is doing: “I think she’s a godsend to parents to remind parents, loved ones, and family members why we must continually remain involved in our children’s lives.”

Wayne Dunlop has grandchildren in this school. He went to the police department with Redman when she filed the second complaint about the obscene material at the Great Valley High School library three or four months ago.

“I said to the police officer if I as an adult showed this to children. I said you would arrest me for pornography, wouldn’t you? And there was no response. Just dead silence. So even the police are ignoring this which is unacceptable,” Dunlop said while holding a poster. “The school board is dead wrong in allowing this to be in the school district.”

Dunlop continued: “My hope is that we will get someone’s attention and say yes, this is pornography. Do you realize you have to be 18 years old in this state to buy a Playboy magazine? But a 14-year-old kid can take this out? And that’s acceptable to a whole group of people that are managing the school district. It’s not acceptable to the parents and grandparents.”

Mom and Son Being Harassed

“The journey has been hard for my son, who clearly is made fun of because his mom is a Puritan or just he’s harassed.” Redman said with tears in her eyes, “I’m raising my son, to respect women, to respect all people.”

“I have no control over what the school is showing him. When I send him to school for eight hours a day, they won’t let me in the library to see the material. I asked them: can you at least provide a list of sexually explicit material?” But she was told they don’t have to provide any list other than what they already have. She said, “I find myself at a loss of words to ask: how long has my son encountered this without my knowledge?”

Redman is also worried about other kids being exposed to this unhealthy stuff. “We don’t know the impact on our children’s psychological well-being or their mental well-being. Regardless, this material is explicit sex in the hands of minors.”

Redman said she believes her phone is being monitored.

Just after she was interviewed on Sept. 7, a police car came to the school parking lot seating area. A policeman walked out of the car and told Redman that the Great Valley School District called the Police to demand she be removed.

Redman said: “I have moms who won’t come to school board meetings because they’re afraid of retaliation. I don’t understand it. But we’re fighting it.”

Redman: Getting Funds to Hire an Attorney to Fight

Redman said she first found out about these materials was November of last year while the kids were home because of COVID-19, all working from home, and parents began to pay attention to what their kids were signing out, or hearing what other parents were sharing at school board meetings.

Redman pointed to the posters which were held behind her. “I asked you, Mr. Shapiro, you’re Jewish. Take any one of these pictures and books and take it to your synagogue and have your children read it. Tell me if the parents would be okay with that.” She referred to Pennsylvania Attorney General Josh Shapiro.

She continued, “And I say to you, Governor Wolf: take any of these books and pictures … and take it to your Episcopalian Church. When you have Sunday school and read it to those children and tell me if that’s okay.”

Redman called, “All I am is a mom saying: Can somebody hear us down here in Pennsylvania?” She is getting funds to hire local attorney George Bochetto to fight.

Four administrators at Great Valley School District did not respond to Epoch Times’ request for comment.