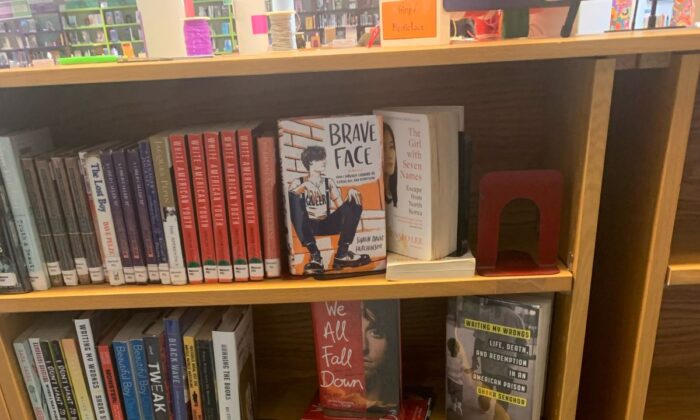 Books on a shelf in the Great Valley High School Library in Chester County, Penn. in 2022. (Courtesy of Fenicia Redman)
Education & Family News

Unable to convince local officials to remove sexually explicit materials from her child’s school library, a Pennsylvania mom intends to take the issue to federal court.

She will ask a judge to remove obscene materials from all U.S. schools.

“I want a nationwide emergency injunction before these kids go back to school,” Fenicia Redman told The Epoch Times. “I am the mother of a child who is being criminally victimized.”

According to the U.S. Department of Justice website, the courts and the U.S. Supreme Court, use the three-pronged “Miller Test” to determine whether material is obscene. The criteria are as follows:

2) Whether the average person finds that the material depicts or describes sexual conduct in a patently offensive way.

3) And, whether a reasonable person finds the material, taken as a whole, lacks serious literary, artistic, political, or scientific value.

Any material that meets the criteria in the test may be found obscene.

Section 1466A of Title 18, prohibits anyone from knowingly producing distributing, receiving, or possessing with intent to transfer or distribute, visual representations, such as drawings, cartoons, or paintings that appear to depict minors engaged in sexually explicit conduct and are deemed obscene.

A first-time offender convicted under this statute faces fines and at least 5 years to a maximum of 20 years in prison.

Section 1470 of Title 18, prohibits anyone from knowingly transferring or attempting to transfer obscene material using the U.S. mail or any means or facility of interstate or foreign commerce to a minor under 16-years-old. Those convicted face sentences of up to 10 years in prison.

“I have a fire in my belly and the only thing that will quench it is to see these people in jail,” Redman told The Epoch Times, referring to school officials who have ignored her pleas to remove the materials from school libraries.

Instead of getting the offending books removed, she has been labeled a “homophobe” and says she was assaulted by other parents at a school board meeting.

Redman says she left a book with one school official so the person would understand the level of sexual detail described in it. The official had it for a month but didn’t read it, explaining they have an adult child who is gay and it would have been good for the child to have support in school.

But Redman does not object to content that offers support to the LGBTQ community.

“I’ve said in a school board meeting, ‘To the LGBTQ students, your parents love you. And students, be kind to your peers.’ I’ve never been opposed to LGBTQ,” Redman said. It is the graphically sexual content she opposes. “It is criminal to show this material.”

To make clear what content Redman considers inappropriate for children, she enlarged images and text from school library books and made posters which she showed to the school board several times.

Not Suitable for Children

When she got no satisfaction at the school board, Redman brought the posters to the Pennsylvania Capitol building in Harrisburg, with a team of concerned parents and grandparents.

In Harrisburg, a Capitol security guard told them to remove the signs because the guards had received a complaint and there may be children walking in the halls.

“He said the posters were inappropriate,” Redman said. All were showing content from the school library.

The book takes a spiritual tone likely to offend parents wishing to guide their children’s faith journey. The book describes body parts as “Sacred sectors” and sex participants as “healers.”

One diagram shows the Star of David with each point labeled for a private body part.

“The star of David, commonly identified as a symbol of the Jewish religion, is actually a meditation design, with the two intersecting triangles representing male and female, mind and body,” the book teaches. “The points on the Star of David also represent the male and female sex organs.”

Posters with excerpts from the book “Gender Queer” show two young males engaging in sex; the book “Push” describes in vivid detail, a child being sexually abused by her father; and “All Boys Aren’t Blue” intimately describes homosexual sex acts.

Redman is preparing the obscenity suit on her own. She has already served the Great Valley School District school board with notices of intention to sue.

The district’s media relations office did not respond to our request for comment.