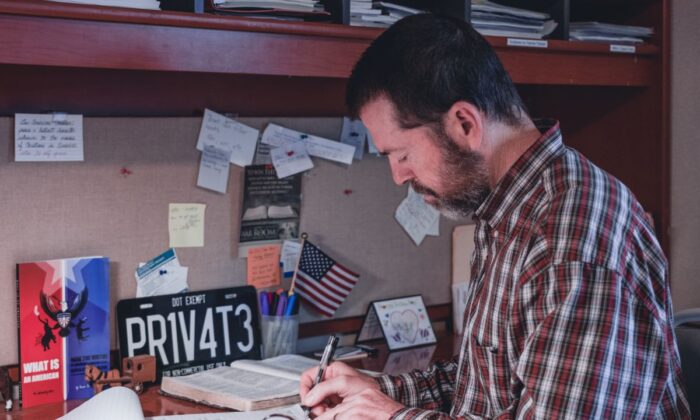 Author Barry Durmaz works at his desk in his Pennsylvania home in October 2022. (Courtesy of Joy Durmaz)
Constitutional Rights

Pennsylvania Man Has Not Filed Income Taxes in 17 Years

'We don't see the IRS in the Constitution,' said Barry Durmaz
By Beth Brelje

The Pledge of Allegiance states that America is “one Nation under God, indivisible, with liberty and justice for all.”

Liberty, the dictionary says, is living free from oppressive restrictions imposed by authority on one’s way of life, behavior, or political views.

Pennsylvania author Barry Durmaz says he is living his life in liberty. That means, among other things, he has not filed income taxes for the last 17 years, and recently he stopped licensing his car. Instead, he had a custom license plate made that says “Private, DOT exempt, for non-commercial use only.”

As a person of liberty, he no longer consents to disclosing private information to the government or filling out forms for taxes or for a car license.

The married father of five is soon to publish his first book, “What Is An American: How the Virtuous Government of America’s Unseen King Deals a Death Blow to the Evils of Socialism, Marxism, and Communism.” In it, he says the liberty of each individual household is the key to America’s freedom.

After considering the Bible, history, and the U.S. Constitution, Durmaz has come to believe that ultimate liberty is faith and self-government, or self-control. That comes from being independently dependent upon God.

Article I, Section 8 of the Constitution gives Congress the power to impose and collect taxes. But Durmaz argues Congress was not given authority to delegate that power to another entity such as the IRS, state governments, or employers.

“We don’t see the IRS in the Constitution,” Durmaz told The Epoch Times. “When Congress is ready to send a bill to me or to whomever, we ought to pay it. But we never received one. It’s good to make a distinction between what taxing authority is in the Constitution, versus this organization, the IRS, that terrorizes people if they don’t fill out these forms.”

He doesn’t recognize the IRS as the authority because he doesn’t consider it constitutional.

“However, [the IRS] obviously has the power. That’s something for all of us to get clear on when we’re navigating life in America with the problems and demands we’re all confronted with,” he said.

Before he stopped paying taxes, Durmaz thought about income tax from many angles. He considered the tax forms available at the post office and the library.

“Nobody is telling me to take those. There is no threat,” Durmaz said. “Of course, there are threats out there, but when it comes down to it, I had to choose to pick up those forms and fill them out.” And he did for years, sometimes preparing taxes on his own, and other times—as a then-business owner—he paid for tax preparation.

As he withheld taxes from employee paychecks, Durmaz thought about one of the 10 Commandments in the Bible, “Thou shall not steal.” He felt that he was stealing from his employees. He had an agreement to pay perhaps $12 an hour, but with taxes, that is not what they earned. The government had not been involved in the agreements between him and his employees. He was in the position of collecting taxes like the IRS.

“In America, we have the right to make contracts. And conversely, that means that we have the right not to make contracts.” He didn’t have a contract and was not being compensated for removing taxes from paychecks for the government. “It’s voluntary on the employer side. I started educating my employees about the IRS and told them they were going to have to go deal directly with them. I’m not going to provide the service anymore.”

Because his wife is Japanese, the family moved to Japan for what they thought would be 10 years. Durmaz filed paperwork at that time regarding the move and was not expected to pay U.S. income taxes. But the family returned to the United States after three years, and that was 17 years ago. He has been off the IRS radar and has not filed income tax since then.

“What our forefathers did though the Declaration of Independence was a declaration of shifting dependence on a visible law giver—that was King George III—onto the awesome, unseen law giver, and that is Jesus Christ,” Durmaz said.

“Who is Caesar in America?” Durmaz asks. “There can be any number of answers. Somebody might say the president of the United States. But people who have some working knowledge of our history, we can conclude that Caesar in America is the U.S. Constitution, or probably more likely, the people themselves who drafted the Constitution, and who won our independence. After the Declaration of Independence was written, they are the ones who drafted the Constitution that formed our federal government.”

People have a natural ability to govern and properly control themselves when they’re under the rule of God, he said.

He looks to the Bible’s book of Galatians, where the “fruit of the spirit” is described. “If the Spirit leads you, then you are not subject to the Law,” Galatians 5:18 says. The book describes the fruits as traits evident in people who are following God’s law.

“The fruit of the Spirit is love, joy, peace, patience, kindness, goodness, faithfulness, meekness and self-control; against such there is no law,” Galatians 5:22-23 says.

God’s spirit is the highest law, Durmaz says, and the one he follows. Liberty starts at home, with self-control, or self-governance, he says.

Durmaz said he’s aware of the risk he’s taking by sharing his story publicly, and that he considered the consequences before agreeing to an interview with The Epoch Times.

“Love casts out fear,” He said “I’m not living in torment. That’s how liberated I’m learning to be.”