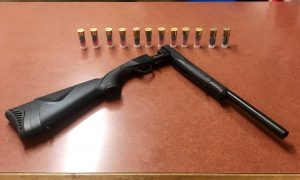 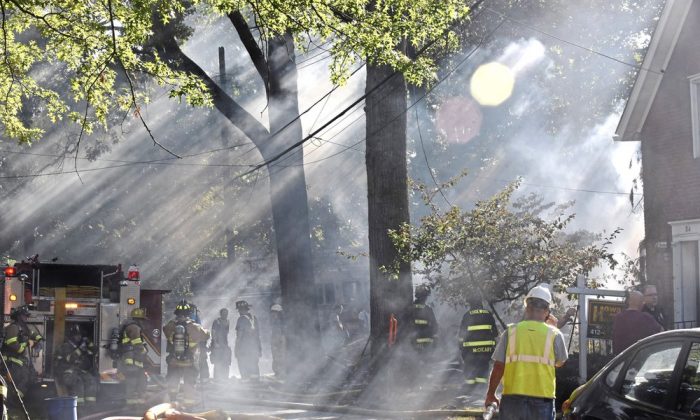 First responders work at the scene of a house fire in Edgewood, Pa,. on Saturday, Sept. 14, 2019. (Christian Snyder/Pittsburgh Post-Gazette via AP)
Crime and Incidents

Police said a homeowner in a Pittsburgh suburb intentionally blew up his house on his daughter’s wedding day.

The man’s body was found in the rubble of the Edgewood home on Saturday, Sept. 14, hours after he was seen standing in front of his house shortly before it exploded and caught fire. The man’s body remained unaccounted for over the course of several hours. Crew sifting through the rubble with heavy machinery found the man’s body around 8 p.m., WTAE-TV reported.

The homeowner’s death has been ruled a suicide. Police have not released his name.

Officials are still investigating the cause of the explosion, but “it looks like he disconnected the gas line in the basement of the house,” Police Chief Robert Payne said, according to The Associated Press. “And of course, it wouldn’t take much of a spark to explode the house.”

“This gentleman apparently had some personal issues and we’ve had information from neighbors that would indicate that there’s a great potential here that he would have blown the house up,” Chief Payne told reporters, KDKA reported.

Neighbors told reporters the home was quickly consumed by flames.

“The house just collapsed in one large movement with a lot of sound to it,” neighbor Dann Laudermilch told the Pittsburgh Post-Gazette. “By that time it was fully in flames. It went up in flames remarkably fast. I thought it would take longer to burn, but it was like a minute and a half—it was crazy.”

Police and fire units responded to the scene of the inferno around 2:30 p.m. Most of the family was out of the house at the time for the wedding, officials said.

Another neighbor described the scene.

“We came outside to see what was going on, and the house was in flames—still standing—but in flames,” neighbor Donna Antolovich told the Post-Gazette. “Three to five minutes before the house blew up, the owner was standing in front of it. After that, nobody could find him.”

Police said they had been to the home before for domestic issues relating to mental illness.

A house next door that was damaged by the fire had recently been sold, and officials say a family had been planning to move in soon.

Here is information on suicide prevention from the National Institute of Mental Health. If you are in crisis, call the National Suicide Prevention Lifeline at 800-273-8255 or reach out to the Crisis Text Line by texting ‘Home’ to 741741.

The Centers for Disease Control and Prevention released a report Vital Signs: Trends in State Suicide Rates on June 8, 2018,  revealing that suicide rates have increased by 30 percent since 1999. However, the report points out that there were a variety of factors other than mental health conditions that lead to suicide.