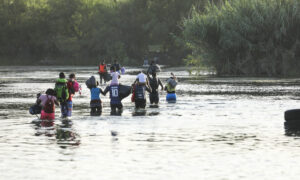 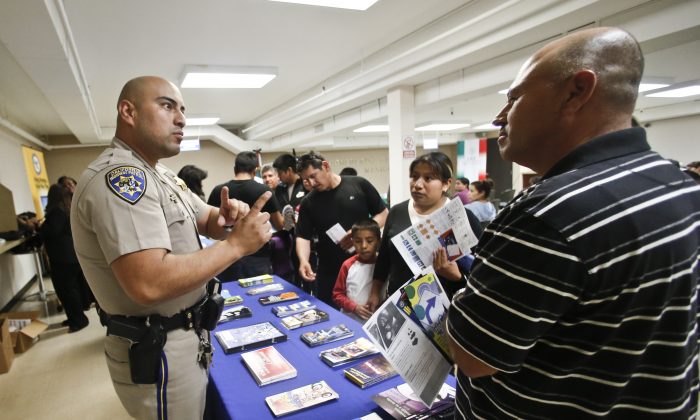 In this file photo, a California Highway Patrol officer explains to immigrants the process of getting a driver's license during an information session at the Mexican Consulate, in San Diego, Calif., on April 23, 2014. (Lenny Ignelzi/AP Photo)
Regional News

A Social Security number is required in Pennsylvania to get a driver’s license, preventing some 160,000 illegal immigrants of driving age from getting their driver’s license.

Pennsylvania’s General Assembly is considering changing that in a measure under discussion during a Wednesday hearing of the Pennsylvania House Transportation Committee. It would allow a Tax Identification Number to be used to obtain a license.

“It’s not just about a driver’s license. It’s about recognizing the basic humanity of every person living in Pennsylvania,” testified Desi Burnette, statewide coordinator for the Movement of Immigrant Leaders in Pennsylvania. She said her group prayed and fasted for 40 days in support of the bill.

With the legislation, she says families won’t have to fear being torn apart as a result of a routine traffic stop.

“We believe this is something that should move forward and we are ready, willing, and able to make it happen if the General Assembly decides to move it forward,” said Kurt Myers, PennDOT Deputy Secretary for Driver and Vehicle Services, who testified during the hearing. “We believe very strongly that the more individuals that are tested and receive a driver’s license based upon passing those requirements, that it is an important step forward in ensuring the safety of all of our residents and anyone who is traveling on our highways.”

Getting a license involves a vision test and demonstrating knowledge of the rules of the road. A license also ensures drivers are insured, Myers said.

Federal law prevents the state from issuing CDL trucking licenses or Real ID licenses to illegal immigrants, Myers said, but a standard license could be issued if state law is changed.

In response to the terrorist attacks of Sept. 11, 2001, Pennsylvania passed a “legal presence” rule in 2002 requiring PennDOT to verify licensees are legally present in the United States.

The proposed law would remove that requirement.

“We are talking about giving special privileges above and beyond what Pennsylvanians have,” Heffley said. “When I go and get my driver’s license, I’ve got to take my birth certificate, Social Security card, two forms of ID—and I’m a state legislator. We make the residents of this state jump through all kinds of hoops, having proof of insurance, registration … we make it so difficult for our residents, but at the same time we want to give special privileges to people who are here illegally. If they are here legally, they can drive.”

In fact, currently, an illegal alien who has a driver’s license from another country is allowed to drive in Pennsylvania, Myers said.

“It is time to recognize the essentialness of agriculture to Pennsylvania’s economy and the equally essential nature of our workforce to making food and agriculture a reality in the state,” Cook said. “I could give you names of farmers who have quit the industry because they could not get enough labor.”

A driver’s license would enable illegal workers to commute to work and driver tractors and other farm implements over the road, Cook said.

“It’s in everybody’s interest to know the people who are doing that have earned a driver’s license and are safe for everyone to be around,” Cook said. She added that it is also about family dignity, allowing for illegal immigrants to drive to the grocery store or family doctor when needed.

Testimony at the hearing was fully in support of the change, with only Heffley speaking in opposition.

“They come and they work in our fields, our meatpacking factories, and our schools. They work in our community, cleaning our houses, cleaning our businesses. And yet we provide no safety net for this community,” Burgos said during the hearing. “For years, the federal government has undermined work visas. It has reduced the number of legal visa opportunities to these countries … We cannot act as if they are invisible. And to those individuals who have taken their time to send my colleagues and I hate mail around this issue, shame on you for undermining the great state of Pennsylvania.”

Republican State Rep. Tim Hennessey, committee chairman, told supporters of the bill that the process of passing a bill often includes many revisions and the bill probably won’t look the same as it does now, by the time it comes up for a vote. Hennessey did not respond to a request for an interview with The Epoch Times.