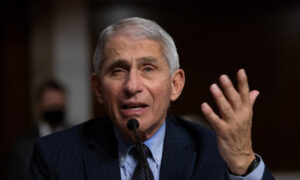 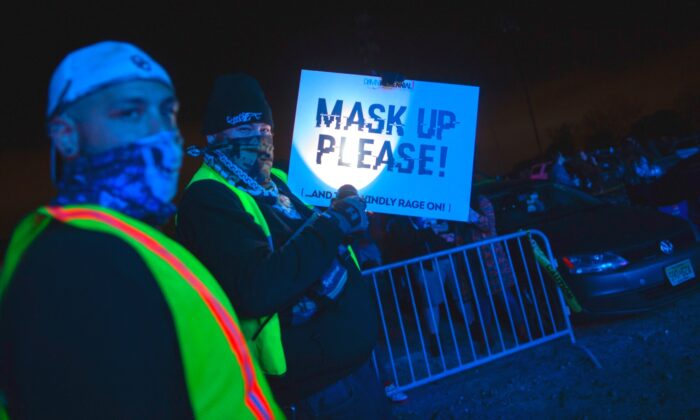 Workers display a sign during the Montage Mountain rave in Scranton, Pennsylvania, on Oct. 23, 2020. (Kena Betancur/AFP via Getty Images)
AMERICA

Pennsylvania’s top health official has announced targeted efforts to curb the transmission of CCP virus cases, including the wearing of masks indoors and travel requirements, as hospitalizations climb in the state.

State Health Secretary Dr. Rachel Levine announced the measures (pdf) on Tuesday, urging Pennsylvanians to “stay at home, to stay in their household, and not to travel.”

Beginning Friday, any individual who wishes to enter the state must test negative for COVID-19, the disease caused by the CCP (Chinese Communist Party) virus, at least 72 hours prior to their arrival, or face 14 days’ quarantine upon entering.

Pennsylvanians who traveled to other states must adhere to the same rules when coming home, Levine said. The requirement does not apply to those who commute to and from another state for work.

The state has no plans to enforce that measure, but is asking for voluntary compliance.

“We have no plans at this time to be checking for tests as people come off airplanes or drive into Pennsylvania,” Levine said, emphasizing the importance of following state measures.

The state has seen a surge in positive CCP virus cases in recent weeks, reporting more than 5,000 new cases daily—up more than 115 percent in two weeks.

CCP virus hospitalizations have also been on the rise. More than 2,700 people are now in the hospital with COVID-19, approaching the state record of about 3,000 in early May.

Under the latest order, the state’s mask mandate has also been strengthened. Masks are now required indoors wherever people from different households are gathered—even if they are physically distant, Levine said.

The expanded mask rules apply to all indoor facilities, including in private homes.

“In the end, people will have the consequences of their actions as well as their families and their communities, and if they do not wear masks, if they do not social distance, then those communities are going to see even more spread of COVID-19,” Levine said.

The Departments of Health and Education also advised colleges and universities on Tuesday to have a testing plan for students returning to campus after the holidays. And Levine asked hospitals (pdf) to move up elective surgeries and said they should be prepared to postpone them if they become flooded with CCP virus patients.

“What we ask everyone is to stand united to stop the spread in Pennsylvania,” Levine said.

Levine said in her order that the measures shall remain in effect until further notice.