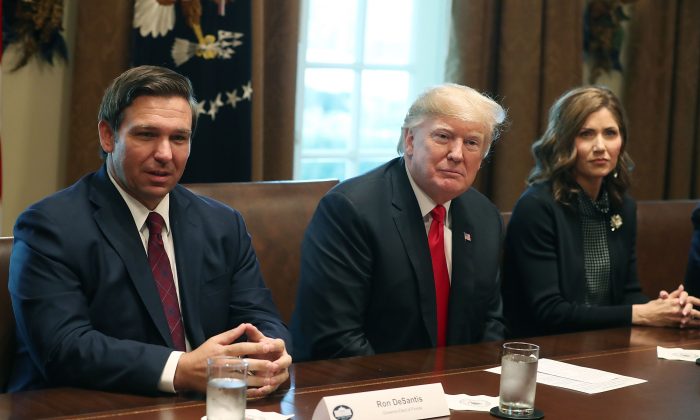 And with 19 electoral votes, it is a must-win for presidential hopefuls.

Many, but not all Pennsylvania Republicans, believe former President Donald Trump is still the person for the job. They say getting a Republican back in the Oval Office is vital.

“It’s absolutely central to our survival,” Schuylkill county author Russell S. Hepler told The Epoch Times. “And 2022 as well. I don’t want to underemphasize this upcoming election, because that’s going to lay the foundation for 2024, for good, or for bad.”

Hepler, a pastor was speaking as an individual, not for his congregation. His book is titled “Yes! We Can Turn This Nation Around!: A Practical Guide for Christian Political Involvement.”

Hepler says the United States is going in the wrong direction.

“If they keep pushing this radical leftist, economic, environmental, and cultural agenda, there isn’t going to be much left to America. When you’ve got a Supreme Court nominee who can’t even define a woman, we know this nation is in serious trouble,” Hepler said. “You can’t survive if you deny reality. That has been the basis for Marxism since its beginning. It’s always based on lies. It’s based on, ‘whatever I say the truth is,’ as the government, as the party, as the big brother.’”

Rick Rathfon, chairman of the Clarion County Republican party, agrees that winning is critical for Republicans.

“Look at the mess that Biden has got us into in just 18 months. I mean, we need to take both the House and Senate back in November and to try to restore sanity and dignity in Washington,” Rathfon told The Epoch Times adding that if Trump runs, he would support him.

But it will be ugly.

Democrats will be out to destroy Trump from day one, Rathfon said. “They’ve never quit trying to destroy him. Trump did a lot of good things for our country. He absolutely did. But I think it would be a mistake for him to run, just because of the hatred that the Democrats and the mainstream media have for him.”

“I love Governor Ron DeSantis from Florida. I hear that in my travels, and from a lot of state committee people.”

The Pennsylvania Republican Party did not respond to requests for comment in this story.

Sam Faddis is a retired CIA operations officer and author of “Beyond Repair: The Decline and Fall of the CIA” and “Willful Neglect: The Dangerous Illusion of Homeland Security.” Faddis has spoken to many Republicans as an organizer of a coalition of more than 75 patriot groups across Pennsylvania that are working together on election reform and other issues.

The majority of Pennsylvania’s Republican voters consider themselves “Make America Great Again/America first” people Faddis said, and they are 100 percent behind Trump on the issues, even if they sometimes have questions about his tactics.

Issues are the center of gravity overwhelmingly for the Republican Party in Pennsylvania, he says.

“There is a gap about the size of the Grand Canyon between those [MAGA] people and a very large number of established Republican politicians sitting in Harrisburg,” Faddis told The Epoch Times.

“While I know the establishment does not want to recognize that fact—they want to continue to pretend like that issue doesn’t exist—for the base, that is kind of the issue.”

The base does not feel like establishment Republicans are representing people and what they stand for, he said.

“We’re over here with Donald Trump again, at least on all of the issues, and you guys want to pretend like 2016 never happened.”

The problem is that Trump is fundamentally different from any president that came before him in recent memory, Republican or Democrat, Faddis said.

“He’s totally outside the system. He’s not part of the uni-party.”

The establishment in both parties have a general consensus on how America’s government is going to be run, Faddis said. That is, always bigger, always more expensive.

“Donald Trump is a wrecking ball, so of course he has to be destroyed as far as the establishment is concerned,” Faddis said.

If the Republican who runs is not MAGA, their campaign is dead-on-arrival in Pennsylvania, Faddis said. And he believes it would be a waste of time for another MAGA-minded candidate to challenge Trump.

“If Donald Trump runs, he will, head and shoulders, without any question, be the choice,” Faddis said. “There’s no question. I can’t imagine that another MAGA-type person could challenge him in the primary in Pennsylvania and have any hope of winning. That’s not possible.”

If Trump decides not to run, Faddis believes DeSantis would be the number one person that the most voters would instantaneously coalesce around.

“I think that, frankly, would be a smart political move, because in some ways, I think DeSantis is a less controversial guy than Trump, for the middle,” Faddis said.

“I can’t conceive of anybody, even a dyed-in-the-wool guy like Ron DeSantis, beating Trump in Pennsylvania. I mean, DeSantis is very popular here. And I love his policies. But you could not possibly convince the base to walk away from Donald Trump as it stands.”

Several Republicans indicated that they don’t want to see DeSantis and Trump battle in a primary. For many, it would be like watching parents fight when you love them both and don’t want to choose a favorite.

Toni Shuppe, founder and CEO of Audit the Vote PA, has been investigating anomalies in the 2020 election since right after it happened.

“I personally believe, based on what I found through Audit the Vote, that Donald Trump won in 2020,” Shuppe told The Epoch Times. “I feel like he won the first time, he deserves his second term. I would vote for him if he runs. But I also really like Ron DeSantis.”

For most folks in this story, the dream ticket would be Trump and DeSantis, although not everyone is convinced DeSantis would be willing to take a vice presidential role when he could govern Florida instead.

For Shuppe, the dream ticket would be Trump and South Dakota Governor Kristi Noem. “DeSantis is young. He’s doing such a good job in Florida. I would like to see Trump and Kristi, and then potentially, eight years of DeSantis,” Shuppe said. “I think, in order to get the country back on track, restoring our constitutional republic, it’s going to take a long time. And I think that that is why a Trump-and-somebody-else ticket makes sense first, followed by eight years of someone like Ron DeSantis. That could really get things moving in the right direction.”

Kurt Dock, a Lancaster Township Republican Committee member, would like to see Trump run, but if he doesn’t, Dock believes the Republican party has strong candidates in Noem and DeSantis.

He says the Democrats have moved too far left.

“When the pendulum swings one way and goes so extreme, it usually comes back just that hard the other way,” Dock said.

“I would like to see someone a little bit more centrist. Not so much to the right. Instead of continuing the alienation, try to get some of the people that are very center, or center-left to come to our side. I don’t think it would be that tough to do.”