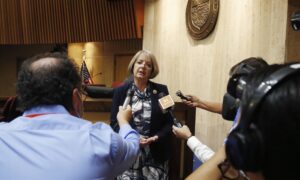 A Pennsylvania Senate Republican suggested that an election audit in the commonwealth is a “very real possibility” after meeting with a group of audit activists at the Capitol.

“There are a lot of things under consideration right now, and I told them to check back in a week or two and we hope to have some more detail,” said Senate State Government Committee Chairman Dave Argall, a Republican, according to a recent interview he gave with a local news outlet.

Argall told the Capitol-Star on Thursday that he was considering subpoenas for ballot details, although it’s unclear what jurisdictions would receive them. His comments came after a few dozen audit supporters gathered at the Pennsylvania state Capitol calling for the legislature to review the 2020 election.

Former President Donald Trump, in a series of statements released by his office, placed pressure on Republicans in Pennsylvania and mentioned Argall by name as well as Republican Senate President Pro Tempore Jake Corman.

“Corman is fighting as though he were a Radical Left Democrat, saying that a Forensic Audit of Pennsylvania not take place,” Trump said on Monday. “Why is Senator David Argall playing the same game? Are they stupid, corrupt, or naive? What is going on?”

The former commander-in-chief, meanwhile, suggested that Corman and other Republicans who oppose the measure could “be primaried” during the next election. Since leaving office in January, Trump has often made announcements where he’s thrown his support behind certain candidates while criticizing others, namely House representatives and senators who supported the second impeachment effort against him.

In a statement to The Epoch Times via his office, Argall disputed Trump’s comment that he doesn’t support an audit.

“For the last two weeks, I have said this many times: I support a forensic audit of PA’s November 2020 elections. We are now investigating the details of how to do that,” Argall said on Tuesday.

Meanwhile, State Rep. Seth Grove, a Republican who chairs the House State Government Committee rejected the idea that an audit of his state is needed. In Pennsylvania, the Senate can vote to authorize an audit without support from the House.

“The PA House of Representatives will not be authorizing any further audits on any previous election,” Grove wrote in a tweet on June 3. “We are focused on fixing our broken election law to make it easier to vote and harder to cheat.”