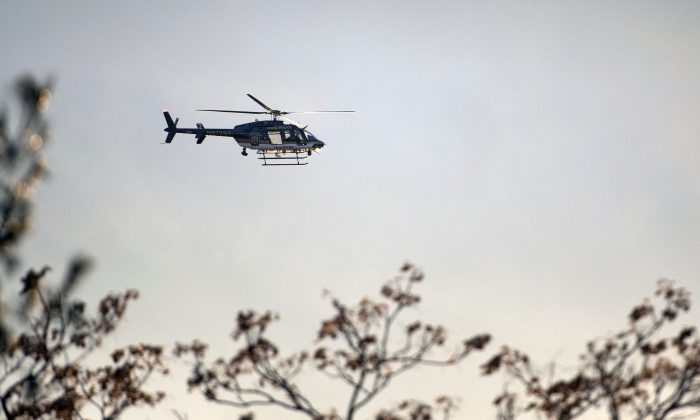 In this Friday, Jan. 1, 2016, photo, a police helicopter searches East Allentown, Pa., as the search continues in the evening for Jayliel Vega Batista, a missing 5-year-old autistic boy who wandered off from a New Year's Eve party on Thursday night. (Chris Shipley/The Morning Call via AP) THE EXPRESS-TIMES OUT; WFMZ OUT; MANDATORY CREDIT
US

Pennsylvania: Body of 5-Year-Old Boy With Autism Found in Canal

ALLENTOWN, Pa.  — The body of a 5-year-old Pennsylvania boy with autism was found in a canal about a quarter mile from a relative’s home where the boy wandered away, barefoot and without a coat, during a New Year’s Eve party, authorities announced Saturday.

The boy went missing about 10:30 p.m. Thursday, after family members told police he was playing with a tablet computer with other children before he simply wandered away without being immediately noticed. Temperatures were near freezing Friday night into Saturday, and rose to only the high 30s.

Search dogs tracked the boy’s scent to the canal, where a searcher found the tablet early Saturday afternoon. That prompted police to call in fire department divers who found the boy’s body about 8 feet from shore, in 6 feet of water, authorities said.

“At this point, we don’t believe there was any foul play involved,” Morris said. But police were continuing their investigation in hopes of pinpointing where, how and why the boy may have entered the water.

The chief couldn’t immediately say whether anyone might face charges because the boy wandered away, though authorities took care to note they were attempting to assist the boy’s grieving family. They asked reporters and the public to respect the family’s privacy, and said a local funeral director has offered to pay for the boy’s burial.

“I loved my son,” the boy’s father Gilberto Vega said shortly after being told of his son’s death, The (Allentown) Morning Call reported. “He had no fear. He didn’t understand the dangers.”

The tablet was found about 30 yards away from where the dogs traced the boy’s scent. It’s possible the boy entered the water at that location, then drifted to the spot where he was found Saturday, authorities said.

Grim couldn’t say how the boy died, or whether he was likely still alive when he entered the water.

“We’ll determine that Monday at the autopsy,” Grim said, adding that calculations involving the water temperature and the body temperature of the boy will help determine how long he’s been in the water and how he died.

Thurman Clark, 25, told the newspaper that he found the tablet computer shortly after joining other searchers at the canal about 1 p.m. Saturday.

“I really hope it’s not his,” Clark said.

Earlier in the day, police Capt. Glen Dorney said 20 search-and-rescue dog teams were looking for Jayliel and crews were recanvassing his neighborhood because a search of nearby woods and other possible locations showed no signs of the boy.

The boy was visiting his great-aunt’s home for the holiday, and left barefoot and without any kind of outerwear, police said.

The residents of Allentown, about 50 miles northwest of Philadelphia, joined the search for the boy without being asked. Police had to ask some volunteers to stop because there were so many, instead urging residents to search their properties, including parked cars and any places the boy might be hiding or seeking refuge from the cold.

Mayor Ed Pawlowski commended the volunteers and others who tried in vain to find the boy.