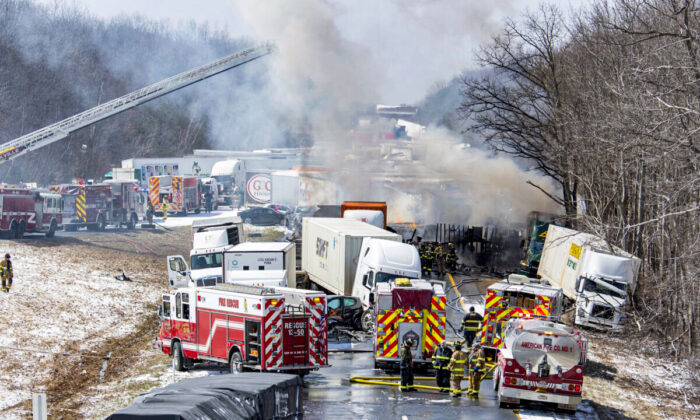 Interstate 81 North near the Minersville exit, Foster Twp., Pa., the scene of a multi-vehicle crash on March 28, 2022. (David McKeown/Republican-Herald via AP)
US News

At least three people were killed and more than a dozen have been hospitalized following a collision on a Pennsylvania highway Monday that caused a major pileup.

The mass pileup of at least 40 vehicles on Interstate 81 near Minersville was caused by heavy fog and precipitation from a snow squall in the area, CNN reported. Videos posted on social media show drivers and passengers lining the snowy road and jumping out of the way as a cascade of crashes unfolds.

Dr. David J. Moylan, the Schuylkill County coroner, said three fatalities had been confirmed by late afternoon Monday and that number could rise because fires were impeding rescuers.

The Pennsylvania Emergency Management Agency earlier on Thursday warned that snow squalls were possible throughout the state.

“Snow squalls can turn your visibility to zero in a matter of seconds. Stay safe by avoiding travel when they’re in the forecast. If you need to travel, do so as safely as possible,” the agency said on Twitter.

Snow squalls can turn your visibility to zero in a matter of seconds. Stay safe by avoiding travel when they’re in the forecast. If you need to travel, do so as safely as possible.

In one video, an out of control tractor-trailer smashed into a large dump truck turning it nearly 180 degrees, another large truck caught fire and spewed black smoke into the air, and an SUV struck a passenger car sending it spinning narrowly past a person standing on the shoulder in snow and fog.

A video mounted on the dash of a vehicle showed how quickly the road conditions changed. Stopped vehicles rose like a wall in front of the driver, and a person on the roadway stretched their arms out and jumped to escape the runaway vehicle. The impact sounded like thunder.

John Blickley, the deputy emergency management coordinator for the Schuylkill County Office of Emergency Management, said officials believe a snow squall clouded visibility and likely contributed to the crash at around 10:30 a.m.

Between 40 and 60 vehicles were involved in the crash, officials said. Emergency personnel from four different counties took about 20 patients to area hospitals for treatment, Blickley said.

“All it takes is one person to crash into something and you have to pull off the road, but when you continue to drive at highway speed, this is what happens,” Pennsylvania State Police Trooper David Beohm said Monday afternoon, noting that fires were delaying a full investigation.

Motorist Mike Moye, who was uninjured in the incident, told CNN that he pulled his vehicle over to the side of the highway when he struggled to see due to the snow and fog.

“I thought it was going to be okay. I thought the cars in the back would know to slow down but no one slowed down. They just kept piling up,” he said.

The Epoch Times has contacted the Schuylkill County Office of Emergency Management for additional comment.