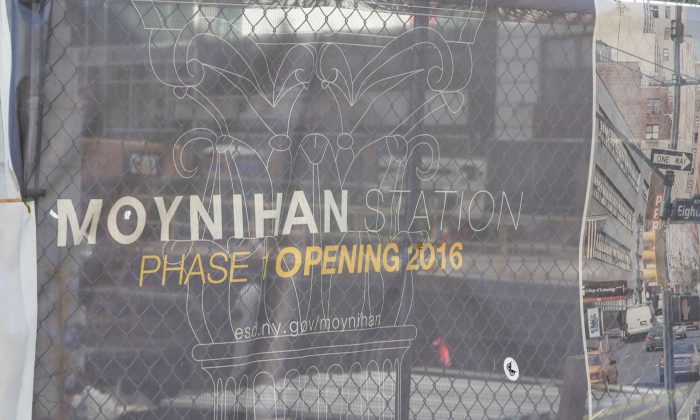 NEW YORK—On 33rd Street, fenced off and dusty for a block between 8th and 9th avenues, lies what will eventually be an expansion of Penn Station, known as Moynihan Station.

Md Shahed Ahmed, 34, who runs a hot dog stand on the corner near the site, says business is so bad in that spot, that usually he has to move a block up or down. But while business could be better, there is little noise coming from the construction site, he says. In fact, it’s oddly quiet.

Ahmed, who emigrated from Bangladesh seven years ago and now lives in Ozone Park, Queens, looks at the Moynihan Station sign with exasperation. “2016,” he said, “But I’m leaving this spot in a month and a half.”

On Wednesday, Senator Charles Schumer announced some positive news for the progress of the station—$40 million will be allocated to the construction of the Moynihan Station, an idea that began close to 30 years ago.

Schumer, who has been lobbying the federal government to fund the project for years, said the investment would help the MTA tighten up in case of another massive storm like Superstorm Sandy.

“We fought tooth and nail for this funding because we need modern, resilient, and reliable subways,” said Schumer in an emailed statement.

Moynihan Station, named after and proposed by the late senator Daniel Moynihan, has been in the works for nearly 30 years, but it was only in 2010 that construction actually began.

The project aims to alleviate congestion at Penn Station, the most used rail station in the nation. Trains come in from Amtrak, NJ Transit, PATH, MTA Transit, and Long Island Railroad.

Madison Square Garden currently sits atop the overcrowded Penn Station with a lease set to expire in 2023. Last year, City Council voted 47–1 to not allow the Garden to remain indefinitely, with the goal of expanding Penn Station.

New York City’s original Pennsylvania Station, built in 1910, was demolished in 1963. The loss of the station spurred so much civic outrage that the Landmarks Preservation Committee was created to prevent a similar incident in the future.

Five years later, the new Penn Station was completed—a modern structure at the time. Today, it is the most congested rail station in the country (and one of the worst, as MTA board members and riders alike have said).

The late Senator Moynihan proposed turning the Farley Post Office on 8th Avenue along 31st to 33rd Streets into a train hall in the 1990s, but progress has consistently been taken in tiny steps.

Schumer came to the Senate in 1998, and became New York’s senior senator when Moynihan retired in 2000.

In 2010, the $700 million project broke ground with $500 million coming from the city and $200 million should come from the federal government according to Schumer.

The state’s Moynihan Station Development Corporation is overseeing the first part of the three-phase project.

Phase 1 of the development includes creating entry and exit points for the tracks in and out of the Farley Post Office. Phase 2 is restoration and design of the main hall, and Phase 3 includes development of public space.