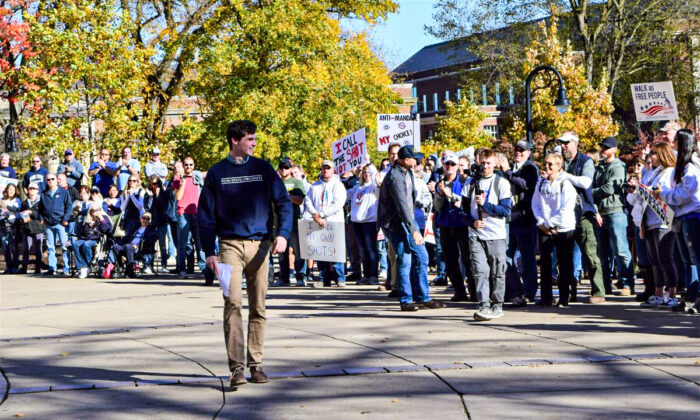 STATE COLLEGE, Pennsylvania—More than 200 people attended a medical freedom rally on the steps of Old Main at Penn State University on Friday. They are part of a national trend as more people facing unwanted COVID-19 vaccinations are gathering and speaking publicly about the difficult choice they face: get the shots or leave your job.

The measure stems from President Joe Biden’s mandates requiring many workplaces to ensure employees are vaccinated.

At Penn State, employees may apply for religious or medical exemption from the vaccine mandate. Those who get the exemption would have to get tested weekly to assure they do not carry COVID-19. Those who are not granted an exemption approval can kiss their job goodbye, employees at the rally said.

Most in attendance were Penn State employees. Many were fearful to speak publicly because they are still trying to get exemption approvals. About 90 percent of those applying for exemption at Penn State have been approved, said a member of Lions for Liberty, a newly formed group of Penn State employees advocating for those who do not want to be vaccinated.

“We do not oppose vaccines. We do oppose vaccination as a condition of employment,” the group said in a prepared statement.

A few employees said they have been approached by managers who have lists of people who have not yet disclosed their vaccination status by uploading it onto an internal computer network. Managers, some of whom themselves are not vaccinated, are asking employees about their vaccination intentions so the school has an idea of how to plan to cover the work of those who will be fired.

Penn State employees at the rally also said they have received word that the exemption is only good until June, and they will have to reapply for it annually.

The rally was organized by the Penn State University chapter of Turning Point USA, a conservative-leaning, student-led nonprofit found on many college campuses.

“We got involved because we believe in medical freedom,” student Kevin McKenna, president of the Penn State University chapter of Turning Point USA told The Epoch Times after the rally. “With the rush to market, people have legitimate concerns and should have a choice.”

Afterward, there was a line of people waiting to pose for a photo with Mastriano, who has gained popularity outside of his district.