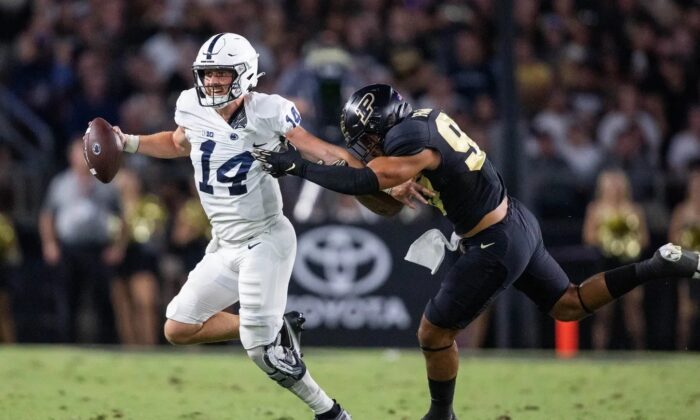 Sean Clifford, who passed for four touchdowns and rushed for another, found Keyvone Lee for the go-ahead score with 57 seconds left to lift Penn State to a season-opening, 35–31 win against Purdue on Thursday night in West Lafayette, Ind.

The Nittany Lions (1–0, 1–0 Big Ten) prevailed in a game that had seven lead changes and 832 yards of total offense.

Penn State punctuated an eight-play, 80-yard drive on a 10-yard connection from Clifford to Lee.

Clifford completed 20 of 37 passes for 282 yards, with one interception. Mitchell Tinsley had seven receptions for 84 yards and a score.

Aidan O’Connell threw for 323 yards and a touchdown on 30–of–59 passing and King Doerue rushed for two scores to keep Purdue afloat.

After the Boilermakers relinquished the lead and momentum late in the second quarter, O’Connell piloted a pair of touchdown drives in the third to give Purdue the advantage. O’Connell hit Charlie Jones, an Iowa transfer, for a 7-yard touchdown with 1:11 left in the third as Purdue grabbed a 24–21 lead.

Clifford vaulted the Nittany Lions to a 21–10 halftime lead, going 8–for–15 for 141 yards and two touchdowns while rushing for 17 yards and another score.

With Purdue driving deep into Penn State territory late in the second quarter, the Nittany Lions forced a fumble from TJ Sheffield that Joey Porter Jr. recovered at the Penn State 18-yard line.

Three plays later, Clifford connected with Brenton Strange for a 67-yard touchdown that saw Strange bounce off a pair of Boilermakers defenders inside the Purdue 45 before dashing down the right side of the field for the score.

The sequence, which ended with two seconds to go in the half, followed Clifford’s 2-yard scoring plunge with 1:44 remaining before halftime.

Clifford appeared to take a low hit to the knee on the run but remained in the game, though he later missed Penn State’s first possession of the third quarter.

Freshman Drew Allar went 2–for–4 for 26 yards in relief.