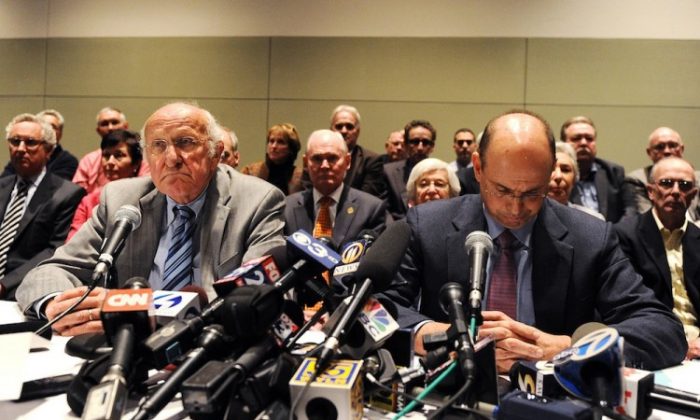 Police try to control students and community members as they react after football head coach Joe Paterno was fired during the Penn State Board of Trustees press conference, in the early morning hours of Nov. 10. (Patrick Smith/Getty Images)
US

The Penn State University (PSU) Board of Trustees announced after a meeting Wednesday evening that after serving for 16 years Dr. Graham Spanier would be removed as president of the college—the latest casualty in charges of child sex abuse that have rocked the university.

“It has been my great privilege and honor to serve Penn State for more than 25 years,” Spanier said in a statement on PSU’s “Live” news website. Spanier went on to express pride in the achievements and advancements of the university, calling his position “a dream job in American higher education.”

He touched on the “wisdom” of the board of trustees decision for a leadership change, adding “the buck stops here.”

“My heartfelt sympathies go out to all those who may have been victimized,” Spanier said.

Spanier’s release coincided with the firing of football head coach Joe Paterno. Paterno, 84, is a legend in college football, serving in his 46th year as head coach at Penn State—the longest tenure in Division 1 history.

After the announcement of Paterno’s firing Wednesday night, the university erupted in protest, with calls to keep him on as head coach. According to reports, a mob of angry students flipped over a van and vandalized the campus. Police were brought in with riot gear and tear gas.

Paterno had announced earlier in the day that he would retire at the end of the season; the board of trustees had decided otherwise.

Pennsylvania Gov. Tom Corbett commented on the firings at a press conference on Thursday. Corbett, a member of the board of trustees, did not go into detail of board discussions, but did express his reasons for supporting the firings.

“Their actions caused me to not have confidence in their ability to lead,” Corbett said, according to the Pittsburgh Post-Gazette.

Corbett also called rioters “knuckleheads,” as he admonished them for their behavior.

“I do not believe in your right to violence—there is no such thing,” the governor stated. “When you chant ‘We are Penn State,’ be sure that you are demonstrating Penn State at its best.”

The firings come in the wake of a 40 count indictment of Jerry Sandusky, former assistant football coach at the university. Sandusky is charged with sex crimes against minors and faces life in prison if convicted.

During the investigation, the court found that regarding the allegations, Tim Curley had perjured himself and made materially false statements to the grand jury in January. On Saturday, the attorney general’s office charged Curley with perjury, and failure to report a crime. If convicted, Curley faces seven years in prison.

For many close to the scandal, the board of trustees’ decision was not unexpected, as the U.S. Department of Education announced its plans to investigate Penn States’ handling of the sexual misconduct allegations. According to a Nov. 9 press release from the department, the investigation will center on whether the university failed to comply with the Jeanne Clery Disclosure of Campus Security Policy and Campus Crime Statistics Act (the Clery Act).

Under the Clery Act, colleges and universities are required to disclose the number of criminal offenses on campus that are reported each year.

In the release, Education Secretary Arne Duncan said, “If these allegations of sexual abuse are true then this is a horrible tragedy for those young boys. If it turns out that some people at the school knew of the abuse and did nothing or covered it up, that makes it even worse. Schools and school officials have a legal and moral responsibility to protect children and young people from violence and abuse.”

According to a press release from the Pennsylvania attorney general’s office, Pennsylvania State Police Commissioner Frank Noonan said, “I hope people will understand that any suspicion of sexual abuse should be reported to the police. Sexual abuse is a serious issue and children are often scared to tell anyone about the abuse.

“Many cases are hidden for years, but by informing the police they can stop it,” Noonan concluded.