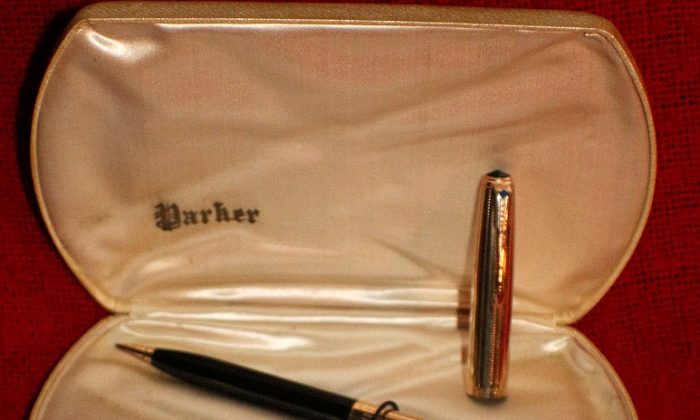 Penmanship is learned in school. The use of computers has created a cult of sloppy writers. A fine hand and elegant penmanship is a sign of pride. Parker pens have been used for generations. The Parker Blue Diamond pen set in its satin lined box has a lifetime contract with the owner. The pen set was considered the ultimate luxury in its day and is, even today, the ultimate legacy. The new Parker Premium black and gold fountain pen will serve new generations that respect fine writing instruments and use their handwriting to make a statement about who they are. (Myriam Moran copyright 2014)
News

When I went to French school ink wells were built into the right corner of student desks. We had handwriting class and were given pens with steel nibs. Thus at a very early age I was taught to form letters in the character of artful European script. My interest was less in penmanship than dipping the long pigtails of the girl that sat in front of me into my inkwell.

Throughout college and graduate schools my handwriting didn’t improve. It became an almost illegible scrawl as I cribbed notes, writing fast to keep up with my professors’ words of wisdom.

It was only when I decided to take up the advantage of typing my graduate school examinations, in a room provided for that purpose, that my grade point average zoomed up ten points. Logical enough, teachers were tired of reading lousy handwriting and didn’t bother to do more than scan my answers. Typing made their arduous task of reading examination papers easier. Legible is better but don’t tell that to a handwriting expert.

Yes there are such people in life. There are questioned document examiners that are called upon by the police to detect forgeries and examine extortion notes. There are graphologists and indeed soothsayers that promise all kinds of personality insights from the way people sign their names and write their letters.

Most in the field of handwriting analysis begin with the premise that no two people write in the same way. It is akin to the postulate that no two finger, DNA or optical prints are the same. There are great differences between physical and genetic characteristics and learned behaviors such as writing.

The age of the computer with all of its attributes and immediate electronic communication has not completely made handwriting obsolete. It has moved it to a different shelf in life’s skills. We certainly count and use basic math skills every day yet dependence on electronics has placed brain power on a different level as well. What then of fine pens, ink and penmanship? Lost arts or important elements in human interaction?

Ballpoint pens were first patented by a tanner that wanted continuous viscous ink to mark his hides. John J. Loud filed a British patent in 1888. It wasn’t until a Hungarian newspaper editor Lazio Biro, with his chemist brother Gyorgy, developed a viscous ink and filed a British patent on the roller ball pen in 1938, that the modern ballpoint pen evolved. Biro moved to Argentina fleeing German persecution of Jews and filed a new patent for the Biro ballpoint pen in 1943.

Today inexpensive plastic ballpoint pens have taken over most every aspect of daily writing needs. They are waterproof, mostly smudge proof and do not require constant care with the pitfalls of soiling hands and clothes with ink. They are not lovely. Despite attempts at adornment, a ballpoint pen is nothing more than a tentative attempt to refine a cherished possession with class it doesn’t have, gold and silver embellishments not withstanding.

I interviewed the director of a major foreign airline. His wealth was evident by his lavish office. He flaunted it with personal possessions that he extravagantly displayed in turn. He had a gold wristwatch by a famed Swiss watchmaker. During the interview he made a rodomantatious display of removing a solid gold pen from his pocket. He unscrewed the cap with affectation, wrote a couple of notes in ink, replaced the cap and laid it on the leather of his desk pad.

The official’s position in life was defined by his gold. I never had a chance to closely scrutinize his handwriting, however, the little scribbles he made on his note pad did not repeat my first grade teacher’s beautiful hand.

It can be, but is not always, the instrument that becomes part of a writer’s persona. It is the signal from the brain that carries itself to the fingers that graphologists describe as personality.

If any went back as far as hieroglyphics it likely could be said of ancient carvers that they embellished their symbols with aspects that foretold their personal lives as well as the content of messages they chiseled.

Over time handwriting changes. In elder years its disarray is often interpreted as coming from increasingly demented minds.

Many claims are made about handwriting as a key to personality. Jess E. Dines in his book ‘Handwriting Analysis’ writes, “What does graphology do? It is probably the fastest way one can learn about another’s behavior and personality with great accuracy.”

Dines adds that “Handwriting is an instantaneous photograph of your mind…it begins with a thought in your brain which is transmitted to a central nervous system and then your hand and fingers, the latter of which are only the vehicles that put it in writing.”

The graphologist’s words are quire poignant. From mind to hand. From hand to paper. Can it be that an interpretation of the resulting scrawl will give insight into the overall process of thought, ability, personality and temperament?

We shake hands, don’t we? A lot can be inferred about a person from the handshake. A slimy, dead fish evokes a reaction as does the death grip of a pumper that asserts dominance and power.

Native Americans disdain the hard shake or banker’s handshake and find a simple touching sufficient as polite greeting. There is learned behavior and custom. Hip-hop hand clasps and those of secret societies are fraternal signals through hand contact. There are learned behaviors fathers teach sons to be manly and present a firm, honest grip and meet another person’s eye contact when shaking hands.

Of course people can fool you. They can wash the slimy sweat off their hands before a first meeting and make an effort to offer a firm grip. Women have come to offer the same firm handshakes as their male counterparts. Yet there is a telegraph operating in the simple signal of shaking hands. Writing is far more complex to analyze.

Sheila Lowe in her book ‘The Complete Idiot’s Guide to Handwriting Analysis’ writes “The written forms created by ink and the spaces around them reveal to the trained eye just what motivates a particular style of behavior.” A direct link asserted between handwriting and the operation of a person’s mind.

That concept is pushed even further by Andrea McNichol, a police consultant on handwriting. Through her analysis detectives have been pointed in the right direction to solve murder and larceny cases. McNichol asserts in her book ‘Handwriting Analysis Putting It To Work for You,’ that she solved a murder case by reviewing employment applications, “One of which was produced by the killer.” McNichol challenges readers, “Can you spot the killer before he strikes again?”

While Sherlock Holmes might be able to deduce important clues from simple observations, can a lay person determine whether to hire, fire, promote, suspect or trust a fellow human being on the basis of their handwriting?

Allan Conway seems to think so. He writes in his book ‘Analyze This—What Handwriting Reveals,’ “Graphologists interpret the strokes, pressure, and loops of a person’s handwriting, which reveal their strengths, weaknesses, and hidden motivations.”

All these assertions coming from authorities in the field must be considered relevant. Certainly more so than my formative years dipping my schoolmate’s beautiful blonde pig tails into my inkwell.

Is handwriting itself a lost art? Is it even necessary? In today’s electronic world people write few letters and hardly issue bank checks. They scan their phones across a reader and work their wiles with buttons so tiny it is hard to fathom any can manipulate them. Of course it is a myopic generation that has done nothing else and would be lost without the perpetual little phone device carried everywhere.

Despite invention of modern attributes in communication there is still a considerable market for luxury fountain pens. They are made of precious metals, bejeweled, ornamented and have 18 carat gold nibs. Matt Conable, founder of William Henry, a company that produces a luxury line of hand made knives and masculine jewelry, created unique pens.

Conable avers that pens “Run from the pedestrian to the garish.” He says “Somewhere in the middle lies the truth in design…William Henry brings new energy and bold materials to luxury writing instruments.”

Long before the typewriter was invented Platt Rogers Spencer founded a school that taught handwriting. The ovals and precisely formed letters became the basis for business and personal correspondence beginning in 1840.

For any that have read American Civil War letters or official documents, the beautiful Spencerian script is evident. The writing form is based on his book ‘Spencerian Key To Practical Penmanship.’ It was the Victorian Age. Letters were the only way to communicate. Men and women poured out their hearts to each other through carefully poised script flowing with emotion.

I have my father’s Parker 51 fountain pen. His lawyerly duties required him to sign, notarize and execute countless documents every day. The pen, with its silver cap, is well used. It remains functional even to this day. Parker Pens, in Janesville, Wisconsin, sold them with lifetime warranties.

My grandfather’s gold topped Parker Blue Diamond pen and pencil set remains in its original elegant hand crafted oval box with satin cushioned inlays. The screw cap pen and gold nib were made in the USA. Inside the box is the original Parker ‘Life Contract Guarantee.’ It reads in part, “Parker’s Blue Diamond on the pen clip is our life contract with the owner, guaranteeing to make good any mishap (except loss or intentional damage) subject only to the charge of US$-.35 for postage…”

Imagine a life contract with a pen owner. How wonderfully proud of their American workmanship and quality. Parker remains the quality name in writing instruments worldwide. The tradition of their founder is continued with a variety of fine writing instruments.

Parker’s Duofold fountain pens, with the company’s distinctive arrow pocket clips, grace the desks of royalty and distinguished business people. Parker pen owners take as much pride in their penmanship as they do in communicating their success by owning one of the world’s finest writing instruments.

My Parker premium black fountain pen is a hallmark of fine craftsmanship. Newly issued in the tradition of George Stafford Parker, the black barrel is accentuated with gold. When the cap is pulled off there is a magnificent golden finger grip and Parker’s traditional 18 carat gold nib. The gold arrow clips it to my jacket pocket.

What is new is old and what is old is new. What is traditional will always be cherished by those that appreciate beauty, fine craftsmanship and functionality.

George Stafford Parker said it best in 1888 when he was 25 years old, “It will always be possible to make a better pen.”

It is hard to think that any could be better made than the Parker premium black and gold fountain pen, but then I intend to keep it forever.