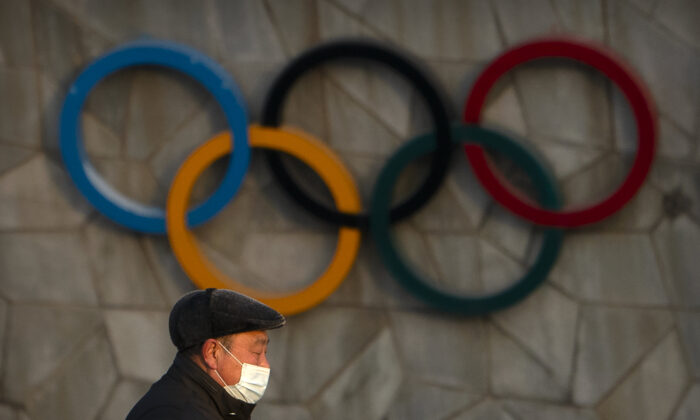 A man walks past the Olympic rings on the exterior of the National Stadium, also known as the Bird's Nest, which will be a venue for the upcoming 2022 Winter Olympics, in Beijing on Feb. 2, 2021. (Mark Schiefelbein/AP Photo)
Viewpoints

The controversy revolving around Chinese tennis star Peng Shuai and the Western response has showcased yet again how rudderless the West is in the face of an assertive China.

The Olympic Charter describes the philosophy of Olympism as a “philosophy of life” with the goal of creating a “way of life based on the joy of effort, the educational value of good example, social responsibility and respect for universal fundamental ethical principles.”

Particularly relevant is the clause that touts political neutrality and condemns discrimination based on race, sex, religion, culture, political opinion, or national/social origin. These are admirable principles. And in communist China, where the Chinese Communist Party (CCP) is committing genocide, as multiple Parliaments have confirmed, we know for a fact that these principles are not upheld.

The International Olympic Committee (IOC) has on multiple occasions found itself successfully co-opted by totalitarian regimes. The IOC under the chairmanship of Thomas Bach has distinguished itself as a CCP sycophant, with Bach’s insistence that Shuai has not been harmed, while not addressing the abuse she endured at the hands of China’s former vice premier, Zhang Gaoli.

Defending its conduct in response to the backlash, the IOC has maintained that the Olympics are a testament to how “the power of sport can bring the world together” and “give us hope for a better future.” It says that it must remain neutral in global affairs. But one can’t be neutral when it comes to defending the principles the committee supposedly extols, especially when a regime like the CCP is in such blatant violation of them.

Western politicians, including Canada’s prime minister, have also spoken out against a complete boycott of the Games, saying attending the event is the best way to press China on its human rights violations or its sabre-rattling over Taiwan or the South China Sea.

Although our elected officials are contemplating a diplomatic boycott, it’s a meaningless action and little more than an attempt to pacify their domestic audience’s wish for their politicians to be more proactive against China. It won’t do much to achieve what a boycott would—deprive the CCP of the ultimate opportunity to use the prestige of the platform and our athletes to advance their propaganda in the immediate post-pandemic environment and attain legitimacy.

In these circumstances, the lessons of history should always be heeded as they demonstrate the dangers of allowing totalitarians such an opportunity.

Consistent with Xi Jinping’s efforts to re-entrench the Party as the central authority, the Olympics will be used as a vehicle to glorify it further and establish it as the sole expression of Chinese identity and civilization.

With Beijing’s recently issued resolution that seeks to counter what has been called “historical nihilism”—which means merely criticizing the regime’s ghastly record—by completely whitewashing the history of the CCP we can only begin to guess how this will inform the propagandistic displays for which our athletes will be political props used to forward the Party’s lies and rehabilitate its image.

During the controversial 1936 Olympics that took place in Berlin, the Nazi regime effectively used the platform to propagate and legitimize its ideological vision for a “new Germany” and have the international community buy into it.

Attuned to Western anxieties about the treatment of Jews following the passage of the Nuremberg Laws in 1935, the regime cracked down on stories about anti-Jewish discrimination and also allowed some Jewish athletes to compete for Germany in order to dress up the reality to foreign observers. Similarly, we can expect Beijing to go out of its way to trot out members of the Uyghur community in efforts to convey how inclusive life actually is for religious minorities in China under the CCP.

The difference between 1936 Berlin and now, though, is that it was not yet fully realized what sort of threat Hitler could pose to the world. In contrast, we know very well the threat the CCP poses as it continues to be blatantly militant and doesn’t hide its intentions. Yet, we’re still keen on rewarding it with such an illustrious platform.

On Aug. 1, 1936, the Manchester Guardian published an editorial expressing concern over the long-term impact of allowing Nazi Germany to host the Games. It opined that “the Olympic Games may remain in public estimation the greatest of the world’s athletic festivals, but faith in them as an instrument for world peace and understanding will have been destroyed.”

What the IOC and politicians have failed to learn is that the character of a regime matters and informs how it will use the opportunity the Olympics gives it. Something to think about as we prepare to watch the despicable spectacle that will be the 2022 Winter Olympics.