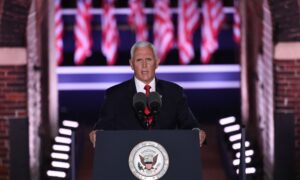 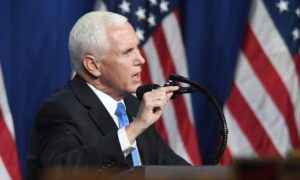 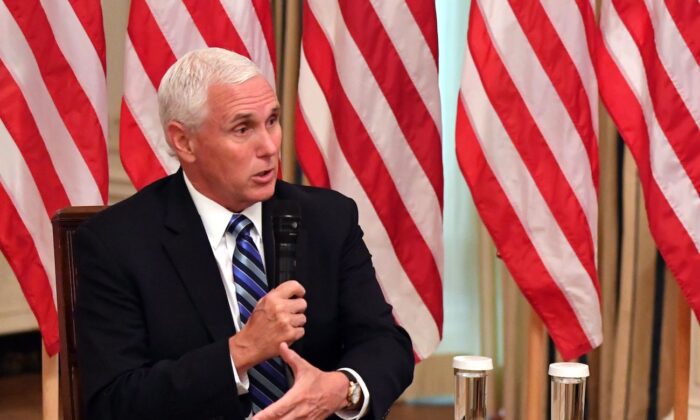 Vice President Mike Pence attend the 'Getting America's Children Safely Back to School' event in the State Room of the white House, in Washington, on Aug. 12, 2020. (Nicholas Kamm/AFP via Getty Images)
Trump Administration

The White House and Congress have reached an accord to avert a looming government shutdown but have not made a deal on any COVID-19 relief measures, said Vice President Mike Pence.

The federal government is headed towards a shutdown if the Senate and House don’t pass a spending bill or a continuing resolution before the end of September.

Pence said there was an agreement reached by Treasury Secretary Steven Mnuchin and top Democrats. Reports on Thursday, which cited unnamed sources in Congress, said Mnuchin came to an agreement with House Speaker Nancy Pelosi (D-Calif.) to avert a shutdown.

“The agreement reached this week by the Treasury secretary and our negotiation team to have a continuing resolution to continue to fund the government when the fiscal year runs out at the end of this month means that now we can focus just on another relief bill,” Pence said in a televised interview on Friday.

A spokesman for Pelosi, Drew Hammill, told The Associated Press that “House Democrats are for a clean continuing resolution.” White House press secretary Kayleigh McEnany also said that “we do believe that we’ll be able to get funding to avoid a shutdown.”

The deal comes as members of Congress return to Washington to negotiate over the next stimulus package that is intended to offset losses incurred during the CCP (Chinese Communist Party) virus pandemic. Some had expected the government shutdown talks to have been complicated by an impasse over the relief package.

Pence, in the interview, reiterated a Trump administration stance against providing more federal funding to state and local governments. Democrats had sought more than $900 billion in their $3.4 trillion HEROES Act, which passed in the Democratic-controlled House in May.

“We’re not going to allow Democrats in Congress to use a coronavirus relief bill to bail out poorly run Democratic states,” Pence said.

The agreement on averting the shutdown means that the White House and Democrats “can focus just on another relief bill, and we’re continuing to do that in good faith,” the vice president added.

Democrats have goaded the Trump administration into putting forth at least $2.2 trillion on the stimulus package, saying that a bill worth less than that won’t pass the House. Mnuchin said in front of the House earlier this week that the administration doesn’t agree to those terms.

Pence said that another round of stimulus payments worth up to $1,200 should be part of the package and that “nobody wants to give direct payments to American families more than Donald Trump again.”

In lieu of a bipartisan deal, President Trump took executive action on payroll taxes, evictions, student loan payments, and provided $300 in weekly federal unemployment benefits. It came after talks between the White House and Congress fell through in early August and as $600-per-week unemployment benefits expired on July 31.

Republicans have said they want to take action in the Senate on a smaller relief bill next week after Labor Day, which is Monday, Sept. 7. Pelosi and Sen. Chuck Schumer (D-N.Y.), the Senate minority leader, rejected their offer.

Senate Majority Leader Mitch McConnell, however, told reporters that he is unsure whether a deal can be made.

“I don’t know if there will be another package in the next few weeks or not,” McConnell told reporters in Kentucky this week, adding that partisan tensions are high at the moment, meaning that it’s unlikely a bipartisan bill would be passed. The $2.2 trillion CARES Act was passed largely along bipartisan lines in March, coming just weeks after the CCP (Chinese Communist Party) virus first hit the United States.