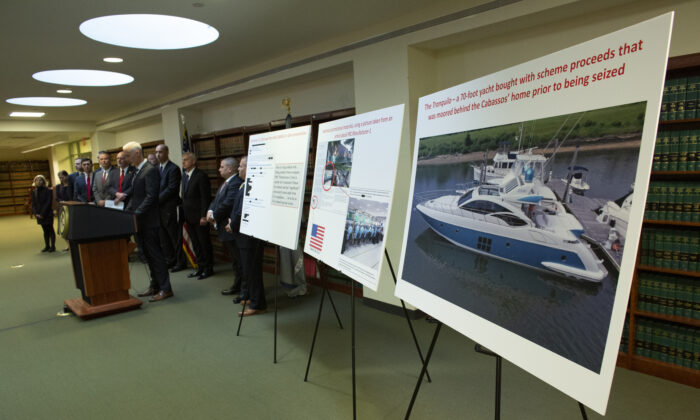 Displays show evidence as the U.S. Attorney for the Eastern District of New York holds a press conference detailing the criminal charges filed against a Long Island tech firm on illegal importation of Chinese surveillance equipment in New York City, U.S. on Nov. 7, 2019. Federal agents raided Aventura Technologies suspected of selling Chinese-made equipment to the U.S. military that it allegedly claimed had been manufactured in the U.S. (Kena Betancur/Getty Images)
Viewpoints

Pence Was Right: China Has a Corrosive Influence on US Companies

In late October, Vice President Mike Pence argued that China’s influence has had a corrosive effect on U.S. businesses.

The desire to pander to the Chinese regime and profit from the nation’s vast markets was causing U.S.-based companies to loosen their ethical and moral standards. They are, as Pence put it, checking their “consciences at the door” when it comes to China.

Given recent events, though, it seems like the situation is even more dire than the vice president initially thought. Not only are companies willing to operate unethically to appease China, but they’re also willing to sacrifice the United States’ national security to boot.

According to a report in Military Times, Aventura worked extensively with China to manufacture tens of millions of dollars worth of security equipment. The company then sold that same equipment to the U.S. military, falsely claiming that its products were produced in the United States rather than China. A government contractor, Aventura allegedly sold $20 million worth of fraudulent products to the federal government.

Indeed, the investigation found that “individuals in China were well aware of what was going on.” And this isn’t the first time a scandal like this has happened, either.

In May, it was uncovered that the Department of Defense was duped into purchasing more than $20 million in Chinese-made counterfeit gear masquerading as domestically made, military-grade products.

China’s creeping influence over U.S. businesses, it would seem, is a serious cause for alarm. Increasingly often, U.S. companies are prioritizing Chinese markets to such an extent that they’re willing to engage in morally dubious behavior to capitalize on the potential profits.

While not all of these companies have committed criminal acts in pursuit of Chinese markets, they certainly have checked their moral compass at the door.

As the vice president aptly pointed out in his speech, corporations such as Nike and the NBA have abandoned any pretext of their support for First Amendment values. Instead, they’ve been working diligently to actively silence opponents of China’s communist regime. But the problem is far deeper than just that. To curry favor with the Chinese, some U.S. businesses have even taken to flaunting their complete disregard for U.S. interests.

In September, at the height of the trade war, President Donald Trump urged U.S. firms to avoid working with China. But just two days removed from the president’s announcement, the CEO of Tesla, Elon Musk, made a direct overture to the Chinese markets.

Musk, whose companies already receive billions of dollars in U.S. assistance in the form of subsidies and government contracts, decided to directly contradict the administration’s stated preferred policy. Musk not only visited China to tour facilities, but he also heaped praise upon the regime, calling it “the future.”

Musk embraced a nation with paltry environmental and human rights records, undermining U.S. interests in the process, all to secure a position within the Chinese economy. Musk’s decision clearly illustrated where his motivations and loyalties lie—and they’re not with the United States.

Unfortunately, this is a growing trend throughout the U.S. economy. Whether these U.S. firms receive federal contracts or billions in subsidies from the federal government ultimately makes no difference.

Clearly, Pence was correct in his assessment. For businesses that prioritize profit above all else, Chinese markets are too great a temptation. And to gain access to them, profiteering companies will readily sacrifice the United States’ interests, principles, and even its national security. Is that a risk we’re willing to take?

Rick Amato is a former financial adviser for Merrill Lynch and founded the Amato Wealth Management Group. He is currently the host of “Politics and Profits with Rick Amato,” and co-hosts Jobenomics America TV. Find out more at amatotalk.com.

Rick Amato
Follow
Rick Amato, is a former financial adviser for Merrill Lynch and founded the Amato Wealth Management Group. He is currently the host of Politics And Profits with Rick Amato, and co-hosts Jobenomics America TV. Find out more at amatotalk.com.