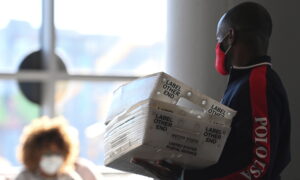 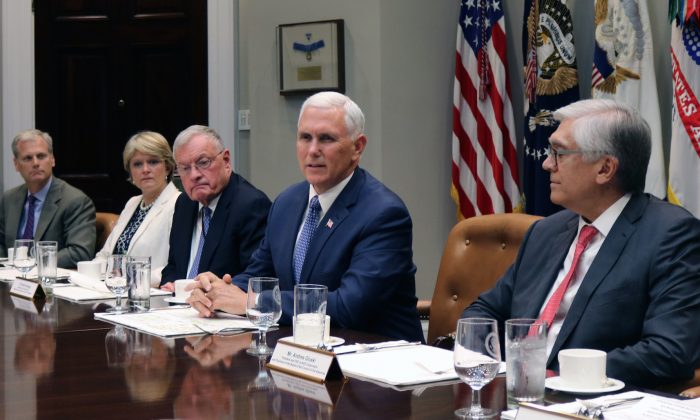 Vice President Mike Pence speaks at a working lunch with the Council of the Americas on U.S. engagement in the Western Hemisphere at the White House in Washington on May 9. (Jenny Jing/The Epoch Times)
Politics

Pence: ‘US Will Not Stand Idly by While Venezuela Crumbles Into Dictatorship’

Venezuela is set to hold a presidential election on May 20, with Maduro seeking a second term
By Emel Akan
Print

Speaking at the Council of Americas meeting at the White House on Wednesday, May 9, Vice President Mike Pence called on the Maduro regime to suspend the upcoming presidential election in Venezuela.

“We are calling on the Maduro regime to restore democratic institutions, to set aside this sham election that is approaching in the coming days, to restore democracy in their country, and to open their nation to humanitarian aid,” Pence said.

Venezuela is planning to hold a presidential election on May 20, with President Nicolás Maduro seeking a second six-year term.

“The United States of America will not stand idly by while Venezuela crumbles into dictatorship and oppression,” Pence said, when asked if the military option is on the table to resolve the Venezuelan crisis.

“President Trump is absolutely committed to doing what is necessary, working with our allies in this region, to restore democracy in Venezuela, and will remain focused,” he added.

Nearly 9 out of 10 Venezuelans are living in extreme poverty, with the inability to buy enough food to eat, according to a 2016 study by Simon Bolivar University.

The oil-rich nation is experiencing the worst economic recession in its history, with its economy having shrunk by half since 2013. The scarcity of basic commodities, including food, drives up the prices in the country. Inflation is expected to reach 13,865 percent this year, according to the International Monetary Fund’s latest forecast.