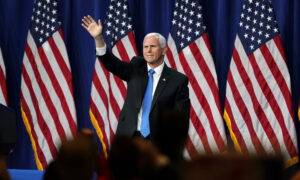 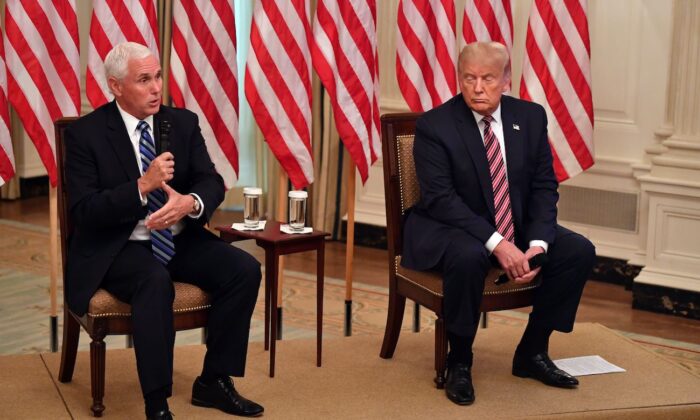 Vice President Mike Pence and President Donald Trump attend the "Getting America's Children Safely Back to School" event in the State Room of the White House on Aug. 12, 2020. (Nicholas Kamm/AFP via Getty Images)
Trump Administration

Pence is tested for COVID-19 on a daily basis, but his continued good health has become critically important as Trump remains hospitalized for treatment. He has taken up some of Trump’s campaign duties and is next in line if Trump’s condition worsens.

A spokesperson for Pence told The Associated Press that the vice president and second lady, Karen Pence, tested negative for the virus on Oct. 4.

“We’re in a campaign. We have a month to go. We see Joe Biden and Kamala Harris out there campaigning. Certainly they’re not asking for a remote debate,” Miller said on Oct. 4.

“Vice President Pence is following the debate, for the vice presidential candidates, on Wednesday. He will be hitting the trail … and he’s going to have a very full, aggressive schedule as will the first family … [We have] no concerns at all.”

In a memo released on Oct. 2, the White House stated, “Under the guidelines of the Centers for Disease Control (CDC), the Vice President is not considered a close contact with any individuals who have tested positive for COVID, including President Donald J. Trump. Vice President Mike Pence does not need to quarantine.”

The White House stated that Pence is in “good health and is free to go about his normal activities.”

White House physician Dr. Sean P. Conley on Oct. 4 said in an update that Trump “has continued to improve” and could return to the White House “as early as tomorrow.”

Trump on Oct. 3 released a video, saying, “Over the next period of a few days, I guess that’s the real test, so we’ll be seeing what happens over those next couple of days.”