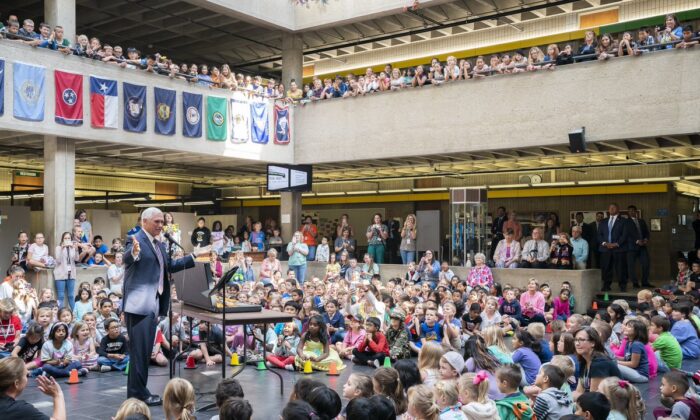 Vice President Mike Pence, a former governor of Indiana, made a surprise visit to a school in the state on Friday, Sept. 27.

Pence arrived at Southside Elementary School in his hometown of Columbus around 12:45 p.m. in what his staff called a surprise visit.

A third-grade class at the school had invited Pence to visit, assisted by teacher Mark Yeaton. The students wrote to Pence a number of times and sent him birthday cards.

The students said Pence should visit them and sign an “Indiana Special Guitar.”

When Pence arrived, the children were assembled in a central hall. Some were on the second-floor balcony. All were cheering wildly.

Pence told the children he received the letters they sent.

It was my honor to sign my name on the “Indiana Special Guitar” next to so many remarkable Hoosiers at Southside Elementary today! Columbus, Indiana is a community that formed my character and my values and it was so great to be back! pic.twitter.com/EwtpmLnuUa

“I flew in from our nation’s capitol on Air Force 2 and I had to come to Southside Elementary,” he said. “I’m the Vice President of the United States but I’m just a guy from Columbus, Indiana.”

He talked about his mother, his stepfather, and a former guitar teacher at the event. He told the kids to dream big, saying “anybody can be anything” in America. Then he signed the guitar, which was blue and in a tiger-print lined case.

After the school visit, Pence took a trip to Camp Atterbury, where he addressed about 500 people, including 300-plus Indiana National Guard members who will be deploying to Kuwait soon.

The amazing men and women of the Indiana National Guard at Camp Atterbury represent the best of America & it was an honor to visit them today as they prepare for deployment. President @realDonaldTrump and I are with you and you will always have our support, prayers & confidence! pic.twitter.com/PiOc099OPN

“My commitment to each one of you as your vice president, and on behalf of our president, is we’re going to continue to make sure that you have the resources, the support, the equipment, and the training to accomplish your mission and defend this nation,” Pence said, reported the Indianapolis Star.

He noted that a father and son were among those preparing to deploy and singled them out to congratulate them, saying the pair “underscores the commitment of families in this state to national defense.”

Pence was slated to tour the NeuroDiagnostic Institute and Advanced Treatment Center later in the day before returning to Washington. The center is a state mental health hospital.

Reporters tried shouting questions at Pence about the whistleblower complaint but he ignored them.

The day prior, while visiting MacAllister Machinery in Indianapolis, he said Congress’ efforts to undermine his and Trump’s policy goals wouldn’t work.

“Whatever they want to do in Congress to obstruct our agenda or roll out their latest accusation against the president to divide this country, President Donald Trump and I are never going to stop fighting for the policies and ideas that have made this country great again,” Pence said.