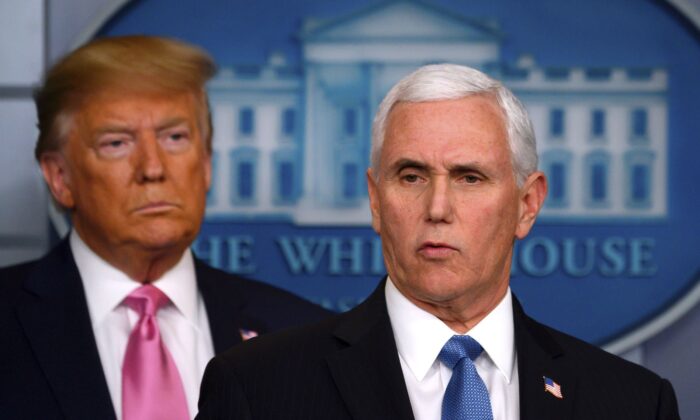 President Donald Trump looks on as Vice President Mike Pence speaks during a news conference on the COVID-19 outbreak at the White House on Feb. 26, 2020. (Andrew Caballero-Reynolds/AFP via Getty Images)
AMERICA

Pence Says US Schools Can Shut Down Over Coronavirus

Vice President Mike Pence said the Trump administration will defer to local governments about their decisions regarding the COVID-19 outbreak, including school closures.

“I think the president would respect any decisions that are made at the state and local level,” he said in an interview that aired March 1 on NBC’s “Meet the Press.”

Pence was placed in charge of the Trump administration’s coronavirus response efforts by President Donald Trump on Feb. 26.

During the interview, Pence made it clear that the federal government is attempting to walk a fine line, allowing for local government and businesses to implement restrictions when necessary. But at the same time, Pence called on Americans not to panic or overreact.

“Those are decisions that governors, in consultation with local health officials, will make as they deem that necessary,” Pence said, when questioned about how local schools should react. “But other than in areas where there are individuals that have been infected with the coronavirus, people need to understand that for the average American, the risk does remain low.“

“What the president has told us to do on the task force, what he did when he initiated the suspension of all travel from China, the quarantining effort, is we’re leaning into this effort,” Pence told NBC. “It’s all hands on deck. Because our effort here is to do everything possible to prevent the spread of the coronavirus in the United States.”

The vice president’s comments come after federal health officials confirmed the first U.S. death in Washington state, saying a male died of the virus in a care facility in Seattle. Pence told “Meet the Press” that the administration was told that the man was in his 50s and had other “high-risk factors.”

“Of the now 22 Americans, including the man who sadly lost his life, the majority of them are recovering well,” Pence said in the interview. Officials in Washington state are now investigating a long-term health care facility in Kirkland following the death and a positive COVID-19 diagnosis of a health care worker there.

Trump has announced more travel restrictions in an attempt to prevent the spread of the virus.  The administration extended restrictions on Iran, where dozens of deaths have been reported in recent days, and raised the level of its travel warning for parts of Italy and South Korea.

“In addition to screening travelers ‘prior to boarding’ from certain designated high-risk countries, or areas within those countries, they will also be screened when they arrive in America,” Trump wrote on Twitter on March 1.

In the United States, as of March 1, a total of 68 cases have been reported—with the bulk of them being passengers who were evacuated from the Diamond Princess cruise ship, which was quarantined off the Japanese coast last month.