Pence Says US Has Enough Tests for Phase 1 of Reopening 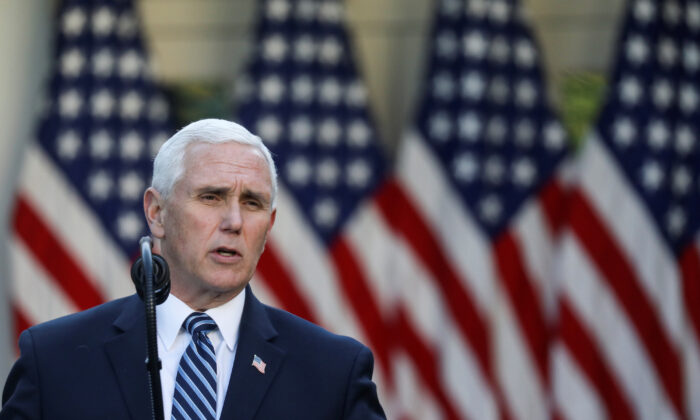 White House officials said April 17 that states have enough COVID-19 tests to proceed to phase one of the Trump administration’s plan to restart the economy.

Vice President Mike Pence told reporters at a briefing of the White House coronavirus task force that “our best scientists and health experts assess that states today have enough tests to implement the criteria of phase one if they choose to do so.”

Pence’s remarks come as the administration faces pressure to increase testing capacity, seen as key to faster lifting of lockdowns.

Meanwhile, protests have erupted across the country amid record job losses and social anguish fueled by stay-at-home directives and business shutdowns.

Charting a path for America’s return to economic normalcy, President Donald Trump on April 16 unveiled the White House plan to reopen in three phases, which lays out criteria for each stage and gives governors the final say in lifting restrictions.

The criteria include decreased reports of influenza-like illnesses and COVID-like syndromic cases within a 14-day period, decreasing documented cases, and that hospitals must be able to “treat all patients without crisis care.”

Phase one is for areas that have met the criteria once. It would still require “vulnerable individuals” to shelter in place and for people to avoid unnecessary travel as well as gatherings of more than 10 people.

Phase two is for regions that have met the criteria twice and have not seen a rebound in infections. It still calls for social distancing but removes nonessential travel restrictions.

Phase three is for places that have met the criteria three times, with no rebounds, and broadly resumes business and social activity with few constraints, also letting “vulnerable individuals” back into public spaces.

Dr. Anthony Fauci, the nation’s top infectious disease expert, acknowledged there were some initial problems with testing, but added that lingering issues were being resolved and would not prevent states from moving to phase one.

“Many of those have been already corrected and other[s] of those will be corrected,” Fauci said April 17. “We will have and there will be enough tests to allow us to take this country through phase one.”

Specifying testing numbers, Pence said at the briefing: “We forged a public and private partnership, and six weeks ago we had performed some 25,000 tests, and at this day we have performed 3.7 million tests. We believe that labs and hospitals are now performing more than 120,000 tests a day.”

Many governors have expressed concerns about lifting stay-at-home orders without a clear picture of case numbers and distribution, and they’ve called for more federal help in ramping up testing.

On April 16, seven Midwest governors launched a partnership to restart their economies, outlining criteria for moving forward with reopening.

They said decisions to reopen would be driven by four factors: keeping the rate of new infections and hospitalizations under control, being able to conduct more testing and tracing of contacts, having enough health care capacity to cope with a potential resurgence, and people observing social distancing guidelines in workplaces.

“We are doing everything we can to protect the people of our states and slow the spread of COVID-19, and we are eager to work together to mitigate the economic crisis this virus has caused in our region. … We recognize that our economies are all reliant on each other, and we must work together to safely reopen them so hardworking people can get back to work and businesses can get back on their feet,” the governors said in a joint statement.

Trump said April 17 that the projected death toll from COVID-19 in the United States is expected to be lower than initial estimates, saying that it is heading to “around 60, maybe 65,000” across the country.

“I always say it, one is too many. This is a horrible thing that happened to our country,” he said.

So far, according to a Johns Hopkins tally, there were 755,533 confirmed cases in the United States of the CCP virus as of April 19. The death toll from the virus nationwide stood at 40,461.

“This invisible enemy is tough, and it’s smart, and it’s vicious, but every day we’re getting closer to the future that we all have been waiting for,” Trump said.