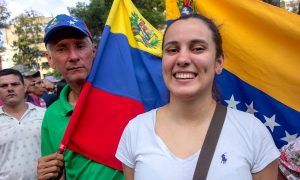 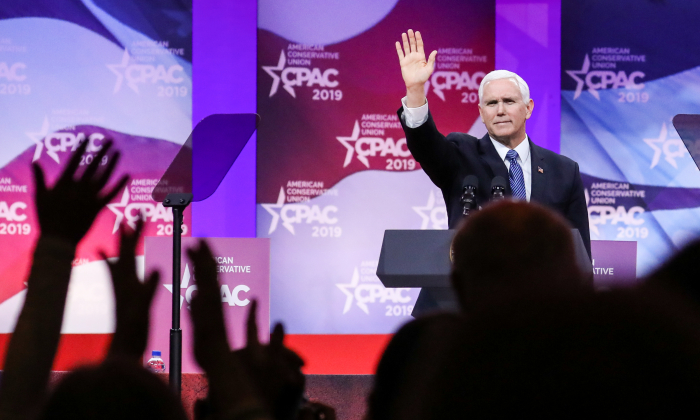 Pence Says Choice for 2020 Is Between ‘Freedom and Socialism’

Vice President Mike Pence told the biggest gathering of conservatives on March 1 that Americans voting in the 2020 presidential election will be choosing between “freedom and socialism.”

In an address to the Conservative Political Action Conference (CPAC) in Maryland, Pence pointed out that a leading candidate for the Democratic presidential nomination, Sen. Bernie Sanders (I-Vt.), is an avowed socialist. Meanwhile, Pence added, many of the other Democratic candidates support socialist policies such as the Green New Deal and Medicare for All.

Pence pointed to Venezuela as an example of socialism’s failure. The once oil-rich nation has been crippled by socialist policies of now-illegitimate dictator Nicolás Maduro. Nine out of 10 Venezuelans live below the poverty line and more than 3 million have fled the nation, Pence said.

The struggle in Venezuela is between “socialism and freedom,” Pence suggested.

“The truth is, Venezuela needs what America has. Venezuela needs freedom,” Pence said. “Freedom is about enabling people to live their lives as they see fit—not government control. Freedom produces more and better goods than any system in any other place and time in … world history.”

“Freedom is more generous, more helpful, and more humane than any other social or economic model ever attempted,” the vice president added. “Because it’s the only philosophy that respects the dignity and worth of every single life and sees every man, woman, and child as made in the image of God. That’s freedom.”

The choice between socialism and freedom will be crucial in the 20 months leading up to the presidential election, Pence told the thousands gathered at CPAC and millions watching across the world.

The vice president devoted the first half of his speech to President Donald Trump’s domestic and foreign policy successes. Trump’s agenda of tax cuts and deregulation, both of which are antithetical to socialism, have led to an economic boom. Meanwhile, the president’s tough, America-first stance on the world stage, which runs counter to socialists’ embrace of globalism, has reinvigorated U.S. industry, adding 480,000 manufacturing jobs.

But Pence cautioned that the progress made under Trump could be reversed if a socialist rises to the seat of power.

Pence’s remarks fell in line with a theme that developed during the first and second day at CPAC, with key speakers exposing and excoriating the Democratic Party’s turn toward socialism. While only a handful of lawmakers openly identify as socialists, some 40 percent of the Democrats in the House of Representatives are part of the Congressional Progressive Caucus, which was founded by Sanders. The caucus overwhelmingly backs the Green New Deal and Medicare for All.

The Green New Deal alone would cost $93 trillion over the course of 10 years, according to one estimate. The figure exceeds all estimated government spending during the same timeframe by $33 trillion. Meanwhile, the policy would see massive government expansion into the private sector, with radical goals such as replacing all combustion engine cars with electric vehicles and rebuilding or replacing every building in America. Conservatives see such expansion as a shift toward government coercion and control, and away from freedom.

“It was freedom, not socialism, that’s moving us beyond the prejudices of the past to create a more perfect union and extend the blessings of liberty to every American, regardless of race or creed or color,” he added. “And it was freedom, not socialism, that gave us the highest quality of life, the cleanest environment on earth, and improved the health and well-being of millions around the world.”

“It was freedom,” Pence said to a standing ovation.